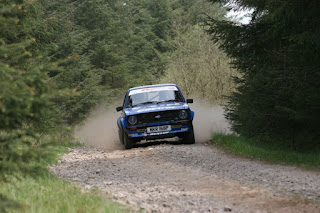 Last year Forestry England conducted a review into their motor sports policy (2 and 4 wheeled) and have now published their findings and conclusions. It makes very interesting reading and although it deals entirely with the English forestry estate, you can bet your little suede boottees that Scottish Forest & Land will read it and take note.

On that basis it's well worth a look for Scottish rally fans. The full 11 page 3000 word Executive Summary has now been published across three pages in the on-line mag so you can read it and form your own opinion.

Also, I now have  a copy of the full 75 page report with graphs and pie-charts and figures - and lots more words to wade through! If I come across anything more of interest, I'll let you know.

Meantime, this report has been received surprisingly  well by many folks down south, but while it makes some encouraging statements and reaches positive conclusions about the future of motor sports in the English forestry estate there are still numerous issues and areas of concern that should concern us all.

For instance the final paragraph states  "....should the environmental objective and responsibility to the widest group of forest users be determined to be more important than the loss of the positive social and economic contribution made by motorsports, then ceasing this activity may be the most appropriate course of action."

That one phrase should concentrate the minds of us all. Dramatic though it sounds, the report's authors lead up to this warning (threat?) by explaining their own environmental concerns and Forestry England's future hopes and targets.

They received around 1700 responses to their call for the views and opinions of current forest users. The report does make sense and the arguments are sound, but encouragingly they are sympathetic to our cause and although they have recognised that automotive technology is constantly improving and reducing harmful emissions there is much more still to be done.

Like Governments and industry they see the way forward as being electrically driven, although they do recognise that this form of propulsion will bring its own problems and this is what we as a sport have to face and address.

They might even consider 'zoning' areas for particular and exclusive sporting use e.g. specifying one forest area for rallying. Think back to the McRae Gravel Challenge which created three forest stages all contained within Craigvinean Forest as a possible example. That format worked well on the day although entries were limited and further constricted by the availability of large enough areas nearby for servicing which are hard to come by in rural forested areas.

One of the more encouraging statements made by the report is that Forest England is only too well aware of the quandary that motor sports represents. The vast majority of current forest visitors arrive at the various sites around the country by fossil fuelled vehicles so they can't just ban motor sport on those grounds!

However, as these vehicles start to disappear after 2025 and are replaced by electric vehicles so the argument for rallying will weaken. They can't support greener initiatives on the one hand and ignore sporting use on the other.

Motor Sport UK is only too well aware of this dilemma and are currently seeking wider consultation with individuals, groups and clubs for ideas to help with plans to safeguard the sport and we can all contribute to this.

Also, more generally, motor sports fans can do their bit to argue against those who say motor sport should be banned. It should be politely explained to those critics that EVERY sport currently uses fossil fuels. Participants and spectators alike still have to travel by motor cycle, car, bus, train, aeroplane and even by ship to take part in or follow their chosen sports. On that basis ours is not a special case, it's just seen to be a direct user of such technology.

So yes, there is lot in this Report about which to be positive, but also lots to concern us. Rallying will need to change and adapt significantly if the sport is to survive.