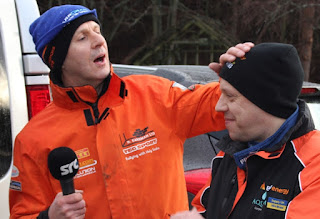 If you are suffering deep rallying withdrawal symptoms, especially with a Scottish flavour, then there is a 15 minute 'fix' available on the ScottishRallyTV 'YouTube' channel. It is entitled '2019 Scottish Rally Championship - Alternative Awards'. And very aptly named at that!

The most surprising thing about this short film is that it has only had 164 views - so far. So maybe more folk need to find it, it's well worth a look and a chuckle.

There is no running commentary - cos it doesn't need it, the 'stars' and actions speak for themselves. Neither is there a semi naked bloke with a big hammer and a bigger gong to get things underway, just a chap called Jock and the Playstation Boys, then Bruce the Doric, Wink and the wasp, and a most definite 'No comment' from Derek Mitchell.

The action then moves on to the naturalised sounds of Scottish wildlife as recorded in the forests, first with Mk2s, then BMWs - and more angry wasps, or rather a variety of FWD machinery of all makes, shapes and flavours, with a special mention for the Irish Toyota boys and girls "sending them on".

That's followed by some highly entertaining and educational 'in-car moments' with a short interlude recognising the 'most professional commentary team' (?) in British motor sport. The film finishes with a short series of embarrassing moments and a final dramatic flourish worthy of that chap Spielberg himself.

So give your eyes, ears and laughter box a treat - and turn the sound up full volume! You don't need to subscribe to watch it, but after doing so, you might just want to: