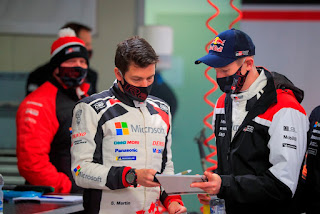 What could (should?) have been a terrific weekend for British motor sport ended with a hiss and a crunch. George Russell was on the brink of a fabulous F1 GP maiden win in Bahrein when the hiss of escaping air cruelly punctured his hopes, while in Italy, Elfyn Evans and Scott Martin were denied a first World Rally Championship title when their Toyota Yaris slid off the road on an icy, snow covered bend.

Evans' luck was every bit as cruel as Russell's. He started Rally Monza with a 14-point advantage over six times world champ and Toyota Gazoo Racing teammate Sébastien Ogier. That might sound a lot but with a driver like Ogier on your tail and 30 points up for grabs, Evans needed a decent run. A top three finish overall and a sensible run on the Power Stage might just have been enough. It wasn't to be.

Although the Yaris wasn't badly damaged, it was parked backwards down a very steep slope below road level. There was no way two young men were going to manhandle that back on the road - even if there had been spectators on hand! 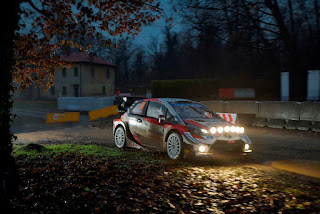 Just think what might have happened had they won. A Welshman and another Englishman would have joined the ranks of previous Scottish and English winners leaving just the Northern Irish to put the 'Great' back into 'British' rallying. And with Ireland likely to get the nod for a WRC counter next year there could have been no greater incentive.

At the finish, Evans looked back on what might have been: "The snow really came down on Saturday afternoon and the conditions were difficult. The first stage was going quite OK and then the stage was stopped. Then in the second stage of the loop, we were having quite an OK run. But the snow started to fall and I basically just got caught out by a surface change underneath the snow that you couldn’t see. I had it in my Notes but ultimately the grip level change was far worse than I expected and there was no chance to stop for the next corner."

"On Sunday it was obviously difficult to get going again after what happened. We were targeting the Power Stage and I think the pace was quite good but unfortunately we managed to stall the car twice in quite extreme conditions. We still managed to get some points from there to make sure we were able to secure the position behind Seb in the championship – congratulations to him and to Julien. To finish the season in second place is obviously not what we wanted, but it’s still not bad and a step forward on my previous seasons. I’ve really enjoyed my first year with Toyota Gazoo Racing and I’m sure with the motivation within the team we can continue to improve and be in better positions next year.” 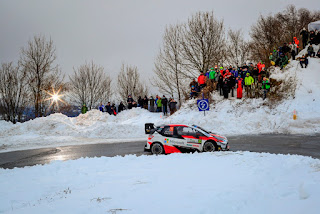 It was little consolation, but Ogier admitted afterwards. “Where Elfyn went off, it could have happened to anybody. Elfyn and Scott slowed me down and I just made the corner. The grip change on that corner was just impossible to anticipate – it was like being on ice.”

Elsewhere Gus Greensmith smacked a gatepost with his Fiesta and took a wheel off, Ruairi Bell finished 3rd Junior and 34th o/a in his Fiesta, newcomer Tom Williams gained valuable experience with 52nd overall while Ireland's Josh McErlean scored a quite sensational 17th o/a and 3rd in WRC3 in his Rally Ireland Hyundai.

( Note: Thanks to Toyota Gazoo for the pics ) 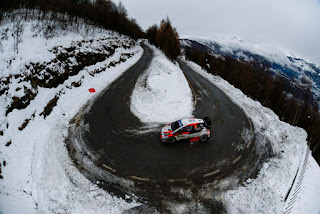 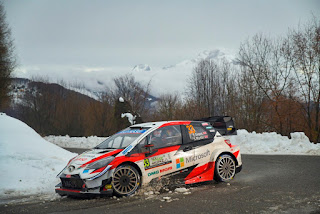