Following on from a tradition established in 1971 whereby the organisers produced a calendar for free distribution to competitors and officials they will do so again this year.

And since there was no rally last October they have come up with a cunning plan. They have designed a 'Hall of Fame' calendar which will celebrate 50 years of rallying on the island.

Those who have featured on past calendar pages will again feature on this new one as the organisers recall and celebrate past winners. It really is an evocative piece of work.

The calendar will be sent out free of charge to those who competed on the 2019 event and those who officiated as is standard practice. In anticipation of feverish demand from those deprived of their 'annual visitational spectatorial fix' additional copies will be printed and sold first come, first served at the measly price of 12 quid each incl P&P. Who said the Scots were mean?

There is however one pic which may well require a Government health warning to protect  those of a weak and nervous disposition from sudden shock. It is reputed that the intrepid official rally photographer may have actually captured an image of a genuine 'Jaggy' on the island.

It has been further revealed that great deliberations have been taking place amongst the organisers, including a call to the World Wildlife Fund for the protection of endangered species and Sir David Attenborough, with regard to the wisdom of including such a rare, shocking and disturbing image and it remains to be seen whether wise counsel will prevail. You'll find out when you receive your copy.

In fact I had actually thought of including a fragment of said photograph here to try and lessen the shock ahead of delivery, but that might just be a step too far.

Instead here is a picture showing the natural habitat of this fabled phantom - note the haze of pipe smoke rising from his lair in the forest! You have been warned. 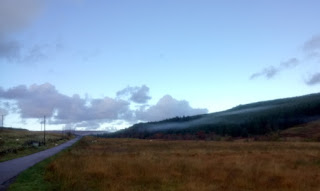