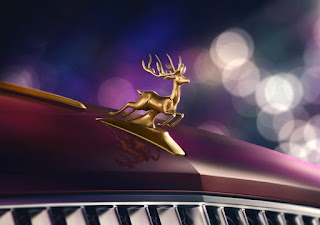 Rumour has it that a very secretive but notorious individual has been working with Bentley’s personal commissioning division, Mulliner, to upgrade his 'regular' transport. And the result? The Flying Spur ‘Reindeer Eight’.

The bearded customer was apparently heard to comment: “What fun it is to ride in a 542 horsepower sleigh. Plus, there’s space in the back for all my subordinate Clauses.  I’m looking forward to putting 41 million miles on the clock before the end of the year.”

There's another clue above the radiator grille. A gold reindeer in lieu of the Flying B mascot, while on the side of this velocipede the V8 badges have been replaced by a special ‘Reindeer Eight’ badge. A spokesperson for the purchaser would not comment on speculation that Rudolf  has lodged a complaint with his union, Silent Unite. 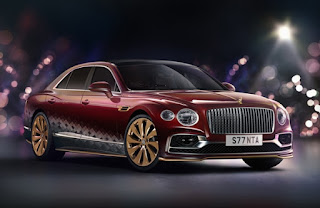 To emphasise the speed and performance required to cover the significant distance by the owner, a gold styling specification has been included, comprising of a carbon diffuser to the front and rear bumper, carbon side sills and a boot lid spoiler – for maximum aerodynamic performance at cruising altitude.  All Season tyres have been fitted to the 22” golden wheels given the cold climate of the customer’s primary residence and workshop.

The interior of the ‘Reindeer Eight’ showcases Bentley’s expertise in creating a modern cabin of unrivalled luxury and innovation, capable of comfortable seating for four or five adults or one mince pie fed personage and up to eight individuals of more elfin stature.

The industry-first Bentley Rotating Display also features in the ‘Reindeer Eight’ but has a few additional modifications to the standard spec. When the engine start button is pressed, the driver is greeted with the welcome sound of sleigh bells a-jingling, and a-ring ting tingling. 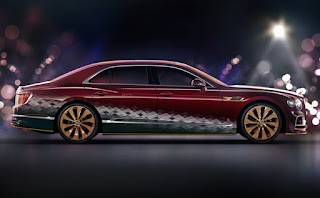 Furthermore, a 'Naughty and Nice' list has been integrated in to the navigation system to allow the customer to know quickly whether his fans have been good or bad while the second side of the display reveals three analogue dials showing outside temperature to help decide appropriate wearing apparel, a chronometer to manage the customer's time schedule and a compass vital for the customer to find his way home at the end of a very long working night.

Apparently, my big pal Jaggy has already been on the phone to Crewe to enquire after the availability and price of a used, high mileage, but eminently suitable vehicle as befits his own august presence!