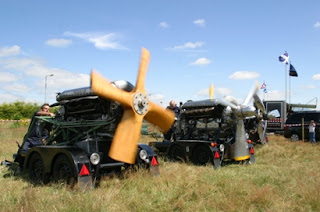 And now for something a little bit different. A Press Release arrived in the mailbox which I found interesting, and perhaps you will too, especially in these weird and wonderless times when we have a little bit of extra time on our hands to indulge in the more gentle pursuit of reading!

The majority of folks who read the stuff on this page will probably know what an SU carburettor is and what it does, but there is one tale which is worth recalling and celebrating.

The original SU carburettor company was dissolved in 1994 and the rights were acquired by Wiltshire based Burlen Ltd who continue to manufacture parts and spares for those who wish to keep their historic and classic machinery on the road. In addition to SU they also manufacture Amal, Zenith and Stromberg units and parts.

Anyway, the original S.U. Carburetter Company was established by one George Skinner and his brothers John and Carl in 1910 in London. This followed on from a patent which George took out 5 years earlier for a new type of carburettor in which both the air and fuel passages varied in accordance with the requirements of the engine. This new design was a marked improvement on the multi-jet fixed choke carburetters of the time.

And so the S.U. Carburetter Company was born - S.U. standing for Skinners Union.

Many of you may also be aware that SU carburetters became standard fitment on the Rolls-Royce Merlin engine and this is where the story gets even more interesting and intriguingly entitled 'Miss Shilling's Orifice'.

The full text of the Press Release is here if you fancy a trip, or a flight, down memory lane: