Rally - A tale of two triers 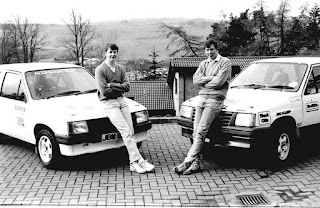 Once upon a time, two young men (just boys really) went rallying, each with the hopes and the talent to make it to the top of the world's sport. One succeeded and the other didn't quite.

Both were quick, one a bit more flamboyant and reckless than the other who had a more considered approach, but on their day just as quick as each other. Both started on trials motor cycles, went to the same school, came from the same town in Scotland and had the same ambition, but only one became World Rally Champion.

In fact there were quite a few Scottish youngsters around the mid 1980s who could have made a bigger 'impact' on the sport including the likes of Dom Buckley Jnr and Callum Guy who both got a chance at 'works' drives, but failed to progress. Not because they didn't have the speed or the talent but because there just seemed to be an awfy lot of Scottish drivers around at the same time.

This was the time when team managers cast their eyes abroad first, especially to Scandinavia, before looking at home grown talent. The same 'disease' afflicted English, Welsh and North Irish rallying. There was often only room at the top for one home-grown nationality, and the 'works' driver situation has only got worse since as manufacturer involvement has been reduced and there are many fewer private 'professional' teams.

Anyway, back to to-day's topic. A bit of light entertainment in these enforced incarcerated, but tranquil, times.

Way back in 2005, my Big Pal Jaggy interviewed one of those 'lost talents'. He didn't make the World series, but he had quite a successful and enviable career at national and international level including regular outings in South Africa and a bit of TV and Radio punditry before calling it a day and getting himself a 'proper' job.

His name is Robbie Head, and he chatted to Jaggy ahead of the 2005 Speyside Stages Rally.
The full interview, just as it was, has been reproduced here in the on-line mag: