This true tale has been told many times in the past, but when someone who looks like this (see photo) comes up with an idea and a suggestion, the wisest thing to do is nod and agree. That's what an impressionable, young, would-be journalist did many years ago, hence the introduction of Jaggy Bunnet to the world of Scottish rally reporting.

The reason for mentioning this is that over the past few weeks, the scribblings and rambling on this social media page have attracted an additional and new following, not just auld gits seeking memories of times past, but also many more who are 'foreign' to the sport up here and wondering what/who the hell is a 'Jaggy Bunnet'. In fact some folk are of the opinion that this character is a mere figment of a whisky infused imagination. If only they knew!

In fact, he had a very extinguished but brief (!) competition career. The shortcomings of his driving ability were quickly unappreciated and led in turn to the much more complex and demanding world of navigating and co-driving. In fact, he did guest as co-driver for some of the top names of the day including Murray Grierson, Alistair Brearley, Charlie Nichol, the wild and hairy John Hyslop and a certain hillclimber and racer by the name of John Cleland.

That went so well that the offers dried up just as rapidly and resulted in him seeking a new career in event organisation and championship co-ordination all the while practicing the dark arts of photography and writing. Over the years he has written for, and edited, a huge variety of newspapers and magazines, including news, business, commercial and sports titles, interspersing those commitments with a bit of radio broadcasting and commentating, but the one recurring theme along the way has been motor sport, particularly rallying.

So that's the background. If you come across any more subsequent mentions of the character, known as Jaggy Bunnet, now you know. It was Drew Gallacher's idea. 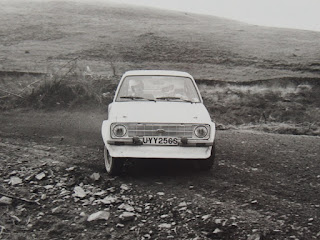 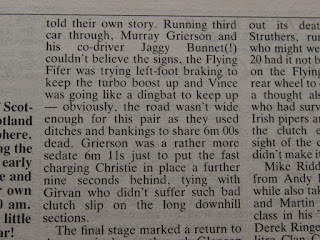