Rally - Job for the Weekend

Motorsport UK has issued a statement to the effect that they are currently working on plans for  a resumption of the sport - when it happens. Like the rest of us, they don't know when that will be, but like every other UK sporting body they can't just sit back with their feet up until they get the 'green' light. 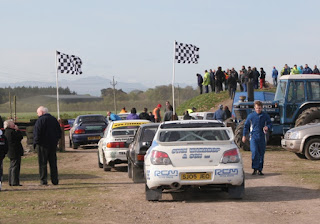 With motor sport suspended right across the land this is also a good time to look ahead and perhaps introduce some long planned changes that could be implemented now without affecting any current plans or championships.

To that end, Motorsport UK is looking for your views, and for once none of us has any bluidy excuse for not taking part.

They currently have three Surveys underway which have been distributed to Volunteers, Competitors and Entrants to gather their views. However, the closing deadline has been extended (makes you wonder if they got a poor response?) to midnight on Sunday - this Sunday, the 10 May.

No excuses - do it now - please. Don't leave it to all the swots, anoraks and those with a gear to grind, MS UK wants the views and opinions of everyone, the volunteers, the part-timers and the full-timers,  from the wheel nut holders to the sandwich makers. The questions are so simple that even my Big Pal Jaggy could manage the multiple choice answers, and he doesn't even need his box of coloured crayons. It's an on-line Survey.
https://www.motorsportuk.org/motorsport-uk-is-listening-sport-development-consultation/

The 'Volunteer' and 'Competitor' surveys are pretty much self explanatory but the 'Entrant' survey is directed towards those who are involved in a more professional basis. And don't be shy about filling in more than one Survey if all three apply and you volunteer, compete and earn a living in the sport. All opinions are valid.

A previous survey was sent out to all those Car Clubs currently listed in the 'Blue Book' but this has now closed. If your own club missed out, they are now too late. MS UK used the club contacts which they have on file so if your club hasn't kept its information and list of 'officers' up to date with the governing body, then it's not MS UK's fault. Tough!Volunteer Survey

If you don't take part then you can't criticise, although I do hope that Motorsports UK will keep us informed as to what the survey results show and what their public want.

Hopefully they can also find time to address the shortcomings of their current Media Accreditation system. As it stands the current scheme is not fit for purpose, and now more than ever, we need to keep the professional Press and Media informed and onside. If the previous schemes had been operated efficiently and properly managed the sport would be better represented in the non-specialist press than it is now.

Just as in every occupation and vocation there are rogues and eedjits who have ruined it for the majority, but whatever your opinions of journalists and photographers, the sport still needs them.
Posted by John Fife at 17:15