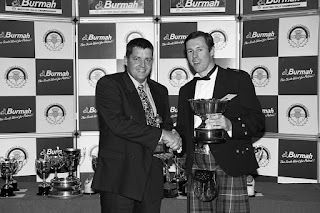 There have been many close finishes in the Scottish Rally Championship since it was founded in 1957, and the 1996 series produced another one. Going into the final round, it was more or less a two-horse race between Jimmy Christie and George Gauld.

Jimmy actually finished 3rd, behind 2nd placed George with Walter Henderson taking top points. So there was a bit of mathematical jiggery-pokery needed to sort out the 1996 title. In the run-in to the rally finish from the final stage, both co-drivers Murdoch Campbell and Roy Campbell (identical twins - not!!) were trying to sort it out.

After the rally (but ahead of the Awards night) my BIG Pal Jaggy wrote up a piece in the Championship Newsletter and I have re-published it in the on-line mag if you fancy a wee trachle down memory lane.

Now, a few folk are puzzled by the use of nicknames in these old reports, but surely that's half the fun? Some snippets may also refer to an ongoing story so you're only getting half the tale. Either, you might work them out for yourself - or you could ask your parents! If really stuck, you could always phone a friend - for sure your friend will be at home these days, eh?

There's also mention of a few names, before they were famous! The story is here if you want an excuse for a seat and a coffee break:
http://www.jaggybunnet.co.uk/2020/05/23-may-lookback-to-src-1996/