Rally - Gemmell’s Day of the Condor 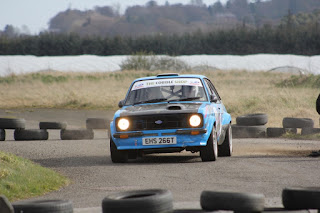 The sun shone and the wind blew, but it was blowing off the North Sea. It must have been making icebergs on the way. By the time it got to the east coast of Scotland it would have sliced cold steel.

Two men didn’t care a toss though. Colin Gemmell scored his first rally victory outside Kames. With David Aitken in the hot (cold?) seat, the blue Escort was a treat for the ears and eyeballs as it bellowed and sped round the airbase at RM Condor. And they celebrated with a cup of tea at the finish. Rock ‘n’ roll, eh?

It was no sure thing though. Over the first four stages, Nigel Feeney led the way in his MINI but a broken spark plug stopped play at the end of the fourth test. That left Gemmell in front. 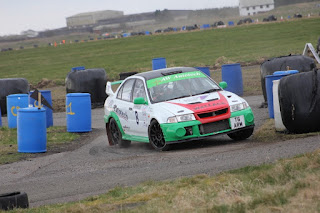 Initially, Kyle Adam was looking good for second place, but Alan Wallace had smacked his Lancer’s nose on a chicane on the first stage and thereafter chased the red Escort all the way to the finish. They tied on the 3rd test before Wallace got past on the 4th and thereafter consolidated second. Even so, this was Adam’s first podium finish on a rally.

There was a bigger surprise in 4th place when Michael Robertson claimed it with the Honda, although, as usual there was less of the Civic intact at the finish than there was at the start. Ross McCallum was hoping for better than 5th place but the MG was all over the place on the loose surface of the first two stages and he spent the rest of the day trying to reclaim lost time. Rounding off the top six was Graeme Rintoul in his Fiesta showing what can be done when the car stays in one piece. 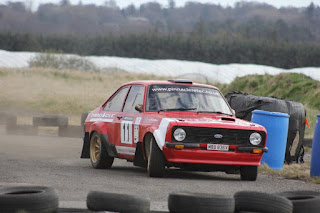 So what happened to the others? Ian Forgan actually set fastest time of all on SS1 but a turbo pipe came off on SS2, and John Rintoul pulled up and stopped when the oil light came on – although he still had oil pressure! Odd one that. And Des Campbell was back to the ‘Dangerous Des’ approach to rallying. He was in the top six when he rattled the nose of the Peugeot on a water tub, breaking a driveshaft and the steering, and Willie Paterson blew an exhaust header pipe off and punctured a tyre on two separate stages.

An eventful day but you’ll have to wait till later in the week for the full story in the on-line mag.

The Junior 1000 runners were in danger of ending in a dead heat with Ollie Hunter and Fraser Anderson dead level after 4 stages, but Hunter was 4 secs quicker on each of the final two tests to take the victory.