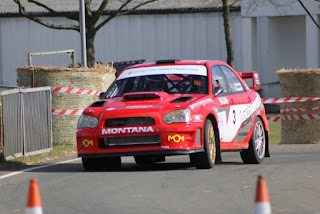 Well, that was close. After 6 stages Gordon Morrison and John Marshall were equal first on today’s DCC Stages Rally at Ingliston with 2 stages to go. Then on the penultimate test, Morrison put 3 secondsworth of daylight between them, setting up a nail biting finale to determine the victor.

Both drivers were in bright red, TegSport run Subaru Imprezas and both drivers were having to be sensible as the cars were running hot in the warm spring sunshine. Given the nature of the stages at Ingliston, the cars have few straights to get a decent airflow through the radiator and engine bays, but young Arron Newby was on the case keeping both customer cars cool in the un-seasonally warm conditions.

Marshall was up for the fight, but guess what?: “My door flew open on the first corner of the last stage,” said John, “I was trying to handbrake it round the corner at the time and hang on to the steering wheel, so I couldn’t grab the door when it swung wide open. Luckily I managed to hit a chicane bale which banged the door shut.”

As for Morrison, no mistakes, just a determined run to the finish: “I’ve won a couple of things at Kames,” said Gordon, “but that’s my first proper rally victory. Like John I was struggling to try and keep the engine cool as the anti-lag kept switching itself off.”

It was good to see John Rintoul back in the hunt too and he finished third overall Just 20 seconds behind Morrison. He’s had a string of poor results over recent months in his Lancer, Skoda and Fiesta, but the Ford behaved itself today: “That was my first troublefree run with the Fiesta and it gave me the chance to play with settings and get it handling the way I like, but there’s more to come.”

Taylor Gibb finished 4th in the Lancer, a tidy less exuberant run than usual paying dividends, and Alan Gardiner was 5th and first 2WD car in the Escort Mk1. Behind him a trio of Mk2 Escorts filled the next three places led by Tom Blackwood from Colin Gemmell and George Auld. There was something different in 9th place, Richard Sutherland’s Opel Manta, while Iain Sanderson’s Mk2 rounded off the top ten.  Iain put his top ten run down to: “A pie, a Mars bar and a can of Irn-Bru” - now there’s a well balanced, protein rich diet worthy of an Olympic athlete, eh?

There was however, one other item of interest which for the moment will remain unconfirmed. Despite strenuous denials, rumours persisted that a certain well known rally driver had topped up his tanks at the rally start this morning with diesel. Surely not – but you’ll have to wait for the full report on JB’s website to see if such an occurrence could indeed have taken place, or was it just terrible slurs on his impeccable reputation by rivals?