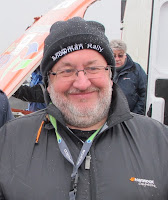 Scottish rallying has lost yet another loyal supporter and enthusiast. Iain Urquhart passed away suddenly and unexpectedly last Saturday.

A stalwart of Highland Car Club, and long time behind-the-scenes grafter at the Snowman Rally, 'Coogie' became more widely known at events throughout Scotland, and even 'abroad' in England, Wales and Northern Ireland, as an MSA Steward and more recently an MSA Safety Delegate.

Like many of the 'older generation' (he would have been just 58 next month!) he started competing in navigational rallies and autotests before a brief foray into stage rallying navigating for Iain McGilvray in the Peugeot 205 amongst others, but his main focus at the time was creating and establishing his own business, Newton Energy. His background in plumbing and heating led to the creation of this Inverness based company which specialised in renewable energy, heating, plumbing and electrical services.

Those early endeavours severely restricted his leisure time activities which centred around his family and his sport. Thereafter active participation in the sport was replaced with enthusiastic participation in Highland Car Club activities, events and management. That led in 1988 to a four year stint as Clerk of the Course for the Snowman Rally. These skills and experience were then shared with other rallies and organisers and also the Scottish Rally Championship committee.

His expertise was based not on memorising the Blue Book but on practical experience of the various duties required of a rally marshal or official. This ability was also recognised by the MSA who appointed him as a Steward, and more recently an MSA Safety Delegate, a much more onerous task. He was a natural choice for such duty. Rally safety was always a concern and in 2006 he co-authored a report with Ulster Rally's Gary Milligan on behalf of the MSA on 'Safety Cars & Their Duties'.

Yes, he could be stern and strict - but not for long. He was opinionated too, but that was because he always believed his cause was right. And yet, if you had a counter argument, he would listen intently, and consider it carefully, before telling you that you were still wrong. That is, in the unlikely event that you were right!

This was a man who could deliver a stern ticking-off when circumstances required and then take the sting out of it with a quip or a joke - thereby making the lesson all the more memorable because of it.

There was a constant whiff of comic menace and serious frivolity lurking beneath that gruff exterior that could only be contained for so long before erupting in a splurge of laughter.

That was probably the reason he was so well liked by those whose paths he crossed and those who crossed his. Humour was the best form of attack, of engaging with others and of imparting advice, an art which he practiced to perfection.

He was great company whether indulging in serious debate or stupid banter and the jokes and tales were endless. Sadly, his untimely passing means there will now be a quiet corner in Rally HQs and car club gatherings where once the laughter radiated.

The sport's loss is nothing like the loss to his wife Teri and the girls, Louise and Hazel. Our thoughts must be with them and their wider family and friends at this terrible time.
Posted by John Fife at 19:52