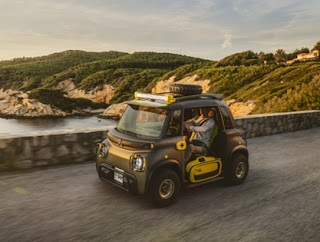 A leading motor car manufacturer is planning a return to the World Rally Championship next year and it's title contender has been glimpsed undergoing testing in the sun swept remote highlands of Scotland.

Electrically powered, the new car has been stripped back to absolute basic essentials to keep the weight low. However, there will be no need for ballast due to the weight of the batteries, having taken inspiration from the layout of the lead acid battery powered 1950s Co-op milk delivery floats. 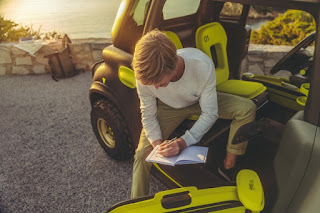 The cutaway doors are  an absolute rallying first in the modern era allowing the co-driver to simultaneously open both pages of an A4 Route Book and fully open out an Ordnance Survey 1:50,000 scale map. Another ingenious feature is the coffee cup holder which has the double function of holding the top edge of the OS map when fully folded out and the co-driver's arms are at full stretch. And it doesn't stop there. This through-flow ventilation system reduces the build up of stoor when traversing stages similar to those which are a feature of Scottish rallies in the Summer months. 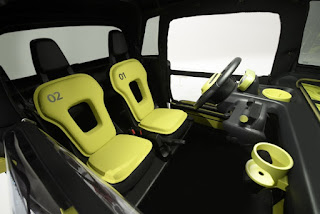 The seats have not been spared the reduced weight approach too with trim kept to a minimum and bolted securely to the hidden internal folding roll-cage structure. This folding structure is another unique feature of the car allowing it to be folded up baby buggy style and wheeled on to aircraft as carry-on luggage to cut down on transportation costs to the various World Championship rounds. It's also worth noting that the seats have been numbered so that the driver and co-driver won't be confused when boarding the machine.

The ultra strong deformable composite plastic bodywork will be protected at the front by a  specially developed 'roo-bar' to help part the huge crowds who get too close to the routes of Mediterranean events.

Unlike other rally cars with highly developed aero-packages, this new machine has taken a different approach. In the event of an 'off' there will be no reduction of speed as the purposefully designed round shape will roll along the road or bounce off the armco and trees while maintaining forward momentum. This curved shape has one other  huge advantage, the curve has been specifically designed to deflect bugs and flies from striking and sticking to the bodywork thereby sparing the lives of millions of such endangered species as the Scottish midge and those ever endearing clegs. 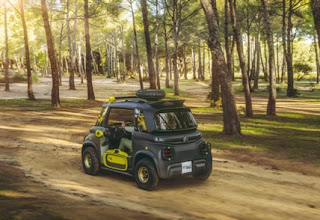 The test car was also spotted with headlamp guards to protect the HiD lamps from suicidal pheasants while the roof mounted Lazerlamp bar is so powerful it can see into the future!

Special wheels and tyres have been developed to help the car find grip in all kinds of terrain from snow to sand, from tarmac to grush.

Little is known as yet about the speed and power of the new machine although sneaky observers at the test have commented: "It wis faster than a red squirrel with it's nuts on fire." Rumours of a sub 5 minute time over Mishnish Lochs could not be confirmed.

We await further developments with interest - or not!