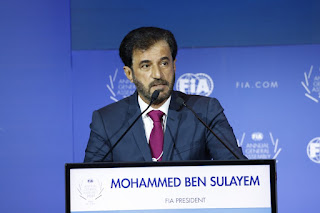 This is positively the last word on the FIA and F1 ... or maybe not ... but if the new President of the FIA wanted to let folk know he had arrived then he might have found a less controversial way of doing so. Instead of trying to defuse the stramash over the final GP of the season he threw another bag of coal into the steam engine of progress with his threat to 'punish' Sir Lewis Hamilton for missing F1’s end-of-season gala in Paris.

Can you imagine the stooshie if the Scottish Rally Championship committee threatened to 'punish' Garry Pearson for not collecting his end of season awards or the BRC doing the same to Matt Edwards? Of course both lads will be at their respective ceremonies although Garry could perhaps be excused for missing out on one, or maybe two, given the fact he's got so many bluidy trophies to collect this past season. But that's by the by, penalising Sir Lewis just smacks of desperation.

As one seasoned (non F1) racing driver said to me yesterday morning: "What's the point of having power if you can't abuse it?" Couldn't have put it better meself!

Anyway Mr Mohammed Ben Sulayem has now replaced Frenchman Jean Todt, who was President since 2009 and served the maximum three terms possible, after winning the election with 61.62% of the vote.

Mr Ben Sulayem has been President of the Emirates Motorsports Organisation (EMSO) since 2005 and was FIA World Motor Sport Council Vice President for Middle East. He is a former rally driver, 14-time FIA Middle East Rally Champion and has won 61 international events from 1983 to 2002.

As is the way of the democratic (?) FIA, you don't just get a President. Like football managers picking their own assistants and coaches, Mr Ben Sulayam has been elected for a four year term along with his personally selected team of ten who are as follows:

They will now represent the FIA's 245 Member Organisations from 146 countries on five continents.