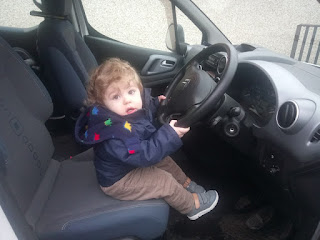 'Ello .. ello .. ello ... wot's going on 'ere? Having been banned from Santa's Grotto (see previous tale), it wasn't long before that irascible pair were in trouble again. Dreading going home to tell Lady Bunnet what had happened, my big pal Jaggy sought solace in the Wayside Inn at Braidwood. Too much solace.

It wasn't really his fault though, as the locals were celebrating a most unusual and distinctly rare occurrence. A lady had been overcome by the heat, the noise and the alcoholic fumes inside the hostelry, so an ambulance had been called. Due to Covid, the ambulance staff were overwhelmed and couldn't promise a quick response, so the lady took herself off to an outbuilding for a bit of peace and quiet.

There under the open rafters and watched over by three sheep and a collie dug, a shrill cry from inside a beer crate rent the still night air. All at once the pub fell quiet as the revellers trooped outside to see what was going on.

"What d'ya mean?" shouted another.

"It's ca'd a miracle, ya mug ye," explained the innkeeper.

And they did all cast their eyes upon this most wondrous of sights. New life in strange surroundings. Outside a luminescent glow lit up the night. It came from a bright light high in the heavens, or it may have been the solitary street lamp that the Braidwood bairns hadn't yet broken, but it acted as a welcoming beacon to wandering souls.

A draught of cold winter air blew in as three lost travellers opened the door and stumbled inside. They had been making their way up the hill from the monastery in Lanark and they did bring presents with them - a cairry-oot, a lump of coal and some black bun.

During the commotion, Jaggy managed to get himself outside and slumped into the back of the van whereupon Grandbaby Bunnet hoiked himself up on to the driver's seat, selected first gear and sped off homewards. Only to be stopped by the BDP (big durty polis)  who had seen the van passing with no-one at the wheel!

The wee chap was up for it though. He gurgled appealingly as the big polis' heart melted, then nicked his car keys, hit the gas and was off into the night like a cork out of a well shoogled Irn Bru bottle.

Some time later, the big chap came to in the back of the van, with a head like a big end rattling off the sump pan and a mouth like a footwell carpet. He looked around the unfamiliar surroundings, realised where he was and wondered - was it all a dream?

NOTE: That's the end of the seasonal silliness and new year nonsense - normal service will be resumed shortly!!

So please stay safe, the world is a dangerous place. As the New Year approaches take care of you and yours from me and mine. Here's to a hopeful, happy and rally guid New Year. 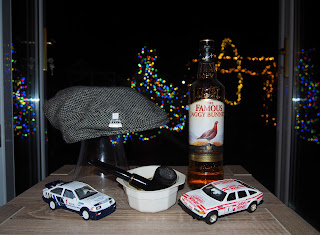