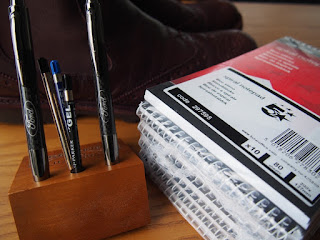 More in hope than expectation, or perhaps just out of sheer habit, the usual end of year rituals were followed last month. Further encouraged by the miraculous appearance of 'a vaccine'  the stationery cupboard stocks were checked and assessed. A normal procedure at season end after Mull and the Kingdom Stages and in advance of a new one. Despite the cancellation of January's Knockhill Stages and the Snowman Rally, the promise of a "cure for all" vaccine by Spring filled the rallying nation with hope, including its scribes and reporters.

To that end a new stock of spiral bound notebooks was purchased in which to note the adventures, tall tales and huge fibs reported by the nation's rally drivers and co-drivers. Also, a pack of refills for the rather special and exclusive Ford Motor Company gunmetal and carbon fibre pens which a certain motoring correspondent 'liberated' from a couple of Ford press launches - essential tools in the noting down of explanations, descriptions and excuses as offered by the nation's rallying talent.

The rally boots too were polished, awaiting the purposeful tread of feet upon gravel and pine needles, and trauchling up and down service areas.

However, the question now arises, following the latest dictat regarding lockdown. When will these be put to use?

Without wishing to add to the gloom, one has to be realistic. Expectations should be tempered with a dose of realism. All over the country organising teams are still unceasingly busy behind the scenes organising rallies ahead of the new season whilst fully aware that the plug could be pulled at very short notice. Indeed plans are already well advanced for the Coast 2 Coast and the Jim Clark rallies in May with meetings continuing to be held remotely on tablets, laptops and desktops around the country. Hopes are high and confidence is hearty, but moderated with an injection of sceptical pragmatism.

These meetings provide an insight into real life with some participants carefully composing their background before going on line, either intending to flaunt and impress, or deliberately showing they don't give a toss apart from hastily hiding the weans' fluffy toys scattered about. From the carefully arranged backdrop of framed photos and trophy cabinets or impressively and intellectually packed bookcases, to kitchen tops or untidy offices, an intriguing peek behind the scenes of normal domestic life can be glimpsed.

There is however one ever so slightly 'silver' lining inside the dark cloud of uncertainty. It is oddly reassuring to note that the vulnerable and the elderly will be first in the queue for inoculations. And given the fact that the majority of rally organisers fall into those categories (!) we can be assured that plans for a resumption are being unwittingly protected by the great and the good of this land who are otherwise striving to shut everything down.

And thus the future of rallying is somewhat assured. Thank goodness for the oldies and the grumpy auld gits, eh?