It was all looking so good for the Brits in Mexico on Saturday. Kris Meeke snatched the rally lead in his Toyota on the opening stage of the day while Elfyn Evans was battling for second place in his Fiesta. It didn't last. Meeke punctured a tyre on the next stage and that man Tänak did what he does best these days, even when he sets out with a disadvantage running first on the road. He caught and passed Evans, but Ogier also did what he does best, lead and win!

The third round of the World Rally Championship in Mexico proved eventful as always. Ford driver Teemu Suninen and Citroen's Esapekki Lappi both crashed out while both Dani Sordo in the Hyundai and Jari-Matti Latvala had to run Rally 2 rules after mechanical problems on the Friday.

It could so easily have been worse. At mid-day service on the Saturday, the M-Sport technicians discovered some damage to the rear cross member of Elfyn's Fiesta. With 14 minutes on the clock, they changed it and the rear differential – normally, a 25 minute job!

On Saturday evening Elfyn said: “It was a pretty good morning for us and a good start to the afternoon, but I was disappointed to have given so much away to Ott [Tänak] on the second pass of Otates [SS14]. I was pushing quite hard, but I just couldn’t get comfortable and didn’t have the feeling to go much faster. The gap isn’t particularly big right now and there’ll be a big fight tomorrow, but if we have a good run I’m confident that we can get the job done. You still have to drive quite smart to be fast here, but at the end of the day we want that second place and we’re going to fight for it.”

At the finish on Sunday, Elfyn rued what might have been: "That second pass of Otates cost us pretty dearly, and then we made the wrong call on the tyres this morning!"

There was disappointment too in the Toyota camp where Kris Meeke completed the Saturday's first stage 12 seconds faster than anybody else to take the lead on his first gravel rally in the Yaris WRC. His puncture on the next stage however cost him a minute-and-a-half, and caused suspension damage that forced him to drive cautiously through SS12.

Kris commented: “I really enjoyed the first stage on Saturday, we had really good speed and we took the lead of the rally. Unfortunately, in the second one I picked up a puncture. I decided to continue, which was probably the correct decision in terms of time, but it damaged something in the rear suspension which I had to carry into the next stage. To drop to fifth and have nothing much to fight for was disappointing, but it's important to hold on to these points and score a strong result for the team.” 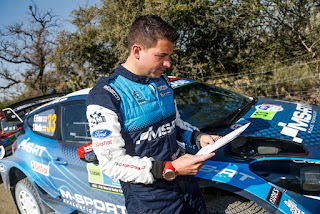 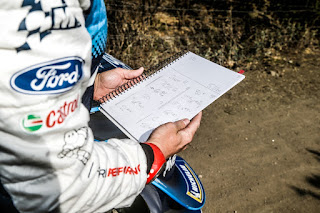 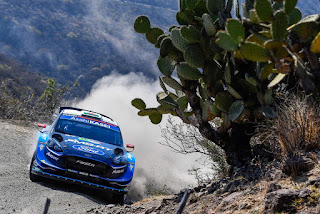 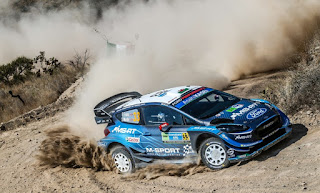 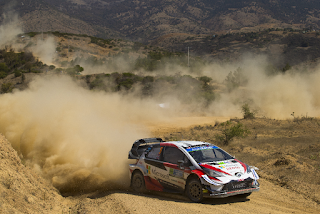 (Thanks to M-Sport and Toyota Gazoo for the pics.)
Posted by John Fife at 11:12