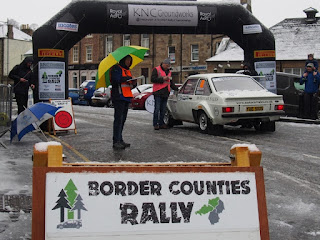 It sleeted, snowed, rained and blew on this year’s Border Counties Rally, but it made no difference to Euan Thorburn and Paul Beaton. They scored their third straight victory, and their first KNC Groundworks Scottish Championship win, of the 2019 season on the trot.

Although it snowed during the early hours of Saturday morning and the roads were white, by the time of the rally start at 8.30am, the snow had turned to rain and the white blanket was turning to grey slush. But by goad it rained. It didn’t let up all day long and the poor Marshals were drookit and frozen, and yet the rally ran on time all day with no delays. With Marshals like this, who needs Europe – bring it on Brexit!

“I don’t like the snow,” said the Focus WRC driver, “so I took it steady through the first two snowy stages thinking that if it clears up a bit then I can push on.” Fourth after 2 stages, he was in the lead after 4, saying: “Thanks to Garry (Pearson) when he spun, I somehow ended up with a half minute lead over him and Jock (Armstrong), that gave me quite a cushion with 2 stages to go so I was able just to be a bit more careful.”

Pearson’s spin on SS3 allowed Jock Armstrong to snatch second place: “I lost nearly a minute,” said Garry, “it just swapped ends when I put the power on out of a Left 8 and got stuck in the mud.” The Fiesta R5 driver was quicker than Armstrong over SS4 and 5 and tied with him on the final test, but it was enough, and Armstrong dropped to third.

Then came the bombshell. The Subaru driver was docked a 2 minute penalty and dropped to 6th at the finish. He was not alone, quite a few crews fell foul of a route amendment which was issued (and signed for) on Friday evening.

Stephen Petch and Michael Wilkinson were a relieved third overall: “That was better than I thought,” said Stephen, “I’ve not had a good start to the year so I was pleased just to get round,” then added, “that last stage was a ‘proper’ stage, Blackburn Rig was the best of the day.”

Freddie Milne finished 4th and Michael Binnie 5th, the two Lancers separated by 3 seconds after a tough day with Armstrong 6th in the Subaru.

Scott MacBeth survived a burst brake pipe in his Lancer in SS2 to finish 7th just ahead of an excellent debut from Thomas Gray in his ‘new’ Lancer. Alan Dickson was 9th in his Lancer from the Subaru of Ian Bainbridge who was 10th after he too suffered a 2 minute penalty!

Those who failed to reach the finish included Donnie MacDonald, Mark McCulloch and John Wink who all went off in the snow, while Peter Taylor who had been tied for the lead early on retired with mechanical failure, Bruce McCombie sheared a bottom arm and Chris Collie had fuel pump failure.

Top 2WD was Steve Bannister in 11th place ahead of Paddy Munro and Iain Wilson, but to read the full story get next Wednesday’s ‘Motorsport News’ with Jaggy’s more extensive tale to follow later next week.