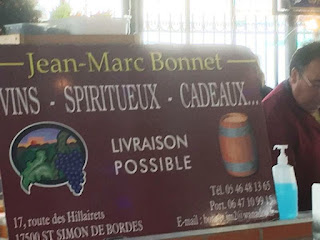 My big pal Jaggy Bunnet is currently in a bit of a tizz, thanks to a pictorial timely tip-off from France (thanks George) sent secretively by email from abroad. It would appear that the French are way ahead of us Brits and them Eurofolks when it comes to Brexit negotiations.

The attached picture proves that those sneaky wine swilling, cheese chomping furriners are already planning their own international 'Jaggy Bunnet Zone' when the Brits go it alone in the world of high finance, commerce and political flag waving. Currently the international debate has stalled as the Brits want the Euroists to build a wall along the northern coast line of France - and want them to pay for it. Apparently this is a fashionable national border accessory these days!

Which leaves the problem of the Tunnel. Who is going to pay for filling that in?

But as I say, the French are way ahead of us in post Prexit planning with their own version of Mr J Bunnet who has actually been spotted out and about in public. This has caused consternation in certain quarters, primarily a certain address in the Place de la Concorde in Paris - the home of the FIA as we all know.

It would appear that the Paris based world motor sport governing body is concerned that there will arise from this international political disruption a new voice of dissent when the Non-Brit Europia is eventually declared. It is further rumoured that they have already initiated secret negotiations with the MSA on the matter of how to handle opposition and disruption amongst the peasants.

Mind you, having  had some experience of this in the past (200 years ago!) there are thoughts of refurbishing the guillotine which is currently on display in the Orsay Museum in Paris. There is a suggestion that this should be installed in the middle of the Place de la Concorde as a visible deterrent to those who wish to disagree with the political masters of motor sport. Fortunately the MSA has a more conciliatory approach to such divisive measures hence the choice of 'ostrich and hole in the sand' as opposed to an 'eagle fighting a dragon' on their coat of arms.

However, it is the appearance of this French imposter which has upset my big pal. There is one saving grace, he has the right credentials, a job in the wines and spirits trade. Maybe there is room for re-establishing the 700 year old Auld Alliance between our two Kingdoms - Vive le Châteauneuf du Pape, vive le Courvoisier VS Le Cognac de Napoleon et vive le fromage Brie.