Rally - In the huff


Motorsport News didn't print my letter this week, so I took the huff. This was sent after reading Colin Clark's column last week, and whilst I agreed with most of what he said, I felt he had overlooked one very important fact. The press was initially reporting that four 'spectators' had been fatally injured in two separate accidents.

I didn't have any major problems with those who don't understand the sport or reporters using the wrong rallying terminology, but when they get an intrinsic fact wrong, then surely that has to be highlighted.

This week there has been a noticeable change in the tone of the reports emanating from the FAI. Even the most sensation seeking reporter has realised that the circumstances surrounding the second accident are completely different from the first and whilst the death of one spectator is one too many, the blame for the other three should not be attributed to the organisers or the competitors involved.

We should also pay tribute to the organisers and volunteers who have done so much to implement the recommendations of the Motor Sport Safety Review Group and the MSA, and also Forest Enterprise who in many cases have gone above and beyond their obligations to help organisers create spectator areas in our forests.

But Colin is right, real change will only come from the spectators themselves. People must assume some responsibility for their own actions. Sadly we live in an age where someone else is apparently always to blame. When people walk into a forest to watch rally cars, they will pass Notices at the entrance which state 'Motor Sport is Dangerous'. Makes you wonder how many folk actually read them and then make their choice. 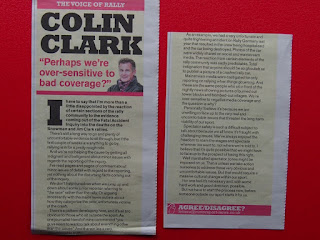 Anyway make up your own mind. There's a copy of the column here and a copy of my letter:

He's right - up to a point. There's a difference between bad coverage and inaccurate coverage and I think that's what riles people, especially rally fans.

My first ever journalistic job was with a small Scottish newspaper called 'Motor News & Advertiser' (no relation to MSN!) and I was given a  piece of sound advice by the wizened old Editor: "Get the facts right and the story will take care of itself."

And that's the point that irks me about the press reports coming out of the FAI. I am not bothered about the mistaken terminology, but the use of the term 'spectators.'

While one spectator fatality in our sport is one too many, the three fatalities involved in the second accident under investigation could not be classed as spectators. Two were signed-on as Media and they had two friends travelling with them who were not signed on.

To suggest there were 'four spectator fatalities' is therefore misleading and casts an even darker shadow over our sport.

Over the past 18 months, the MSA has introduced and led a transformation of the organisation of our sport and the work is still progressing thanks to the efforts and enthusiasm of countless volunteers across the country. And yet there is still much to do.

Perhaps Mr Clark could ask another question at the next World Championship event he attends - When will the FIA  take action?

As for the comments and opinions in my own personal Blog, I will continue to report on the sport and endeavour to be as factually accurate as I can be.    ----
Posted by John Fife at 11:52