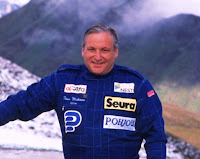 It was with a great deal of sadness that I heard of the passing of Timo Makinen this week. I haven't written an Obituary, many others who knew him better have done so, but while they have concentrated on his achievements as a rally and race driver, I have some rather more personal memories. In fact, I once shared a car with Timo, but it wasn't a rally car, and it wasn't him who was driving! In fact, he was declared an honorary Scot that day and was henceforth known in certain circles as 'Timothy McKinnon'. The full story is here, if you're interested: