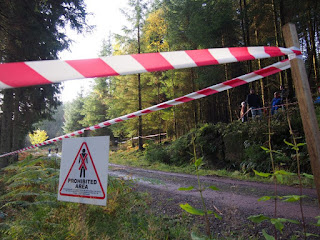 I was expecting a bigger news media backlash after the tragic accident which claimed the life of a spectator on the Monte Carlo Rally. Perhaps the sport was lucky - this time. Although the continental press has a more tolerant view of such incidents, the British press did not pick up on it. No doubt other world events were concentrating minds and efforts elsewhere such as the Dis-United States of Trumpland.

As I said the sport was lucky. It would have been so easy for the non-specialist, sensation seeking side of the 'news media' to criticise and an easy headline to write. Especially since the introduction this year of more spectacular and powerful cars with improved (faster) aerodynamics could have provided the sport's detractors with strengthened arguments  to criticise our sport.

Indeed, it made some within the sport question the wisdom of introducing faster machinery at a time when national governments are urging sports governing bodies to make sport safer. Not just for those who take part but for those who officiate and spectate.

This may yet come back to haunt us. Dates have now been confirmed for the official Fatal Accident Inquiry into the Inverness and Duns tragedies. There will be a preliminary hearing this month (February) and the full Inquiry will be heard in July.

No doubt the 'great British press' will be waiting to record and publish proceedings with a liberal application of pre-conceived expectations and ill considered opinions based entirely on a lack of knowledge of the sport and its following.

Without going into the circumstances of such tragedies and  incidents, British stage rallying is under scrutiny like never before. Remember, there were two quite separate incidents on the same day on the Duns event. Also, there are still ongoing repercussions from the accident in Aberdeen in which three spectators were injured way back in 2012 and the Court of Session has yet to rule on these. This incident happened in the same year that there were two fatalities and seven injured at another bad accident in Cavan in Ireland while another accident in 2015 left two injured at Tralee in Co Kerry.

If the sport is to survive, let alone thrive, then we must all assume some measure of personal responsibility to ensure that it is safe to watch. That means intervening if folk are seen to be standing in exposed locations. Most general public will listen to advice from those who know better but the biggest problem is with the 'eedjits'. Those who think they know better.

It s because of them that the future of spectating on rallies will henceforth be one of controlled and managed spectator areas with no movement into and out of stages being permitted while the rally is passing through.

The days of arriving at a stage in a hurry, legging it in ahead of the top seeds to get a vantage point and then leaving after seeing them to catch them at a later stage are long gone. Regardless of the experience and knowledge of such afficionados, we cannot be seen to be endorsing this practice.

But before we start  flagellating ourselves with big sticks it is worth bearing in mind that the most dangerous sport at which to spectate remains football.  Care has to be exercised when quoting statistics because such figures inevitably refer to personal tragedies, but nevertheless they are always used to bolster arguments or support criticism. Even so, more lives have been lost by fans travelling to and from football matches, entering or leaving stadiums and even within stadiums yet there has never been a call to ban football. But just as that sport has learned lessons, so too must ours.

It's not a question of comparison just an observation that statistics can be used for good as well as bad.

It's up to us, and not just the MSA or individual event organisers, to keep the uninformed safe from themselves. The days of folk assuming responsibility for their own personal safety are long gone. Sadly these days, many refuse to accept any personal blame or criticism when things go wrong, instead lashing out and blaming someone else. No matter their own shortcomings, it's never their fault.

This is not something that will be easily controlled or managed, it will require a culture change in peoples' own behaviour.

This applies equally to the olds hands who 'know better' and have survived their own early years of spectating and think they are invulnerable. They too must comply if only to set an example for newcomers and innocent bystanders.

This is something that we all have to bear in mind at the start of a new rallying season. The eyes of the nation will be upon us like never before and sharply brought to a wider public when  the FAI gets underway.

Whether we like it or not the new rules are here to stay, but that won't be enough to protect our sport from its detractors. We must observe these new rules and heed the advice of Marshals. There is no scope for standing idly by and laugh at the eedjits when they are showered by stones or fall into ditches.

Please. Stand well back, and use your knowledge and experience to advise others. The future of our sport is in our own hands. The alternative is reliving memories amongst friends in the pub, watching films and reports from events in the past, or weekends spent pulling up weeds in the garden.