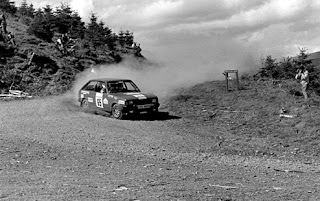 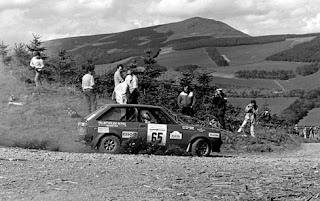 The previous post created quite a stir and going by the page statistics, it has been shared right across the UK by individuals, clubs and associations. It obviously struck a chord. So what's the next step?

I don't like the term 'educate'. That could be regarded as insulting by folk who just want to go out and watch cars speeding through the forests. I prefer 'inform' and  'encourage'. If we can engage with spectators rather than antagonise them, then we might get more support. This might also make the job a wee bit easier for Marshals.

The appeal is about the thrill of the pace and antics of the car and whilst the superstars and top national and club drivers display their technique and control with speed and drama, the idea would be to encourage spectators to stay and watch everyone through, comparing cars and drivers, with the later runners.

Just as spectators enjoy a different kind of satisfaction from watching other amateur sports as opposed to their professional counterparts, so rally spectators can derive similar pleasure and enjoyment from the later runners in the smaller cars. For a start they can use their eyes and ears to compare those who are trying with those who are learning.

Most of us derive just as much enjoyment from watching a trier in a 1400 Nova as an expert in an R5. David Bogie being  a case in point, or Euan Thorbun and Garry Pearson when they first appeared in 205s, or further back, Ken Wood in a Mini, and who can forget Callum Duffy's debut efforts in an Escort that looked like a refugee from a scrapyard, sorry, vehicle recycling centre. If we can inspire that sort of interest then casual watchers might just take more interest.

How do we achieve this? One idea might be to hand out free entry lists to everyone at spectator car parks, which list all driver and co-driver names and their homes towns with their car make and model and engine capacity. They might not understand class structure but they can relate to marques and engines and will identify with local crews. Not everyone will buy a programme but this alternative could be relatively easy to print and handout free of charge - subsidised by MSA and Forestry Commission with a safety message?

An A3 double sided sheet folded to A4 should do the trick. Easy to fold and carry, and easy to look at in the stage. Such a sheet could also carry other details about the sport and the class structure and perhaps highlight who the leading 1400 and 1600cc contenders are likely to be. Give folk the info and they will take an informed and renewed interest. Not everyone will buy a programme even if a club makes them available so some spectators are missing out. This makes them feel wanted as well as better informed.

The provision of commentary has worked in  the past, but it is rather more expensive to arrange outdoors. Also, there is a distinct lack of knowledgeable and entertaining motor rallying commentators about these days too!

Smart phones and social media pages are another good way of pushing information out, but  although networks can reach 90% of the population they can't reach 60% of the countryside! That's down to all those bluidy trees and mountains!

We therefore need more ideas, to help generate more interest and create more memories. Like the first time I saw a skinny, lanky, tousled haired young Finn in a battered Opel Ascona. It was on the 1975 Scottish Rally where the scuffed and scarred flanks of that poor, tortured, wee mechanical beastie marked him out as a trier. His career progressed, the results came, and in 1981 Ari Vatanen duly won his first world title.

A bigger impression was made on me by the antics of a certain 1600cc Talbot Sunbeam on the International Scottish Rally in 1986. I was already aware of the car and its driver so I waited, long after all the superstars had passed through, just to see his progress.

The scene was the wide, open, downhill hairpin near the end of Cardrona. From the outside of the bend (yes, I know!), the cars could be seen approaching from the top of the hill, hurtling down the straight with a 'jump' and slight kink to the right just before the braking area for the hairpin itself.

Anyway, this wee Sunbeam came bursting out of the forest like a firework looking for a hand grenade factory. Over the jump, straightened, dab on the brakes, and turn into the hairpin without the slightest lift on the throttle. The tail swung out, gripped and slid through the bend, teetering on the edge of the road on the exit, inches from the ditch and disaster, careering on down the following straight in a cloud of dust, gravel and chuckies. No panic, no fear and absolutely no hesitancy. Foot to the floor all the way. Magic, pure magic.

That sight has remained with me ever since, so that I can say smugly to anyone who will listen, I was there when a certain youngster was carving notches in his gearstick. That youngster went on to win the world title in 1995.

We may never see the like of Colin McRae again, but that shouldn't stop us, and all spectators, from going to the forests, watching everyone through and making our own informed judgements on what we'd seen and who we thought showed skill, talent and bravery.

Surely that is the best reason to encourage folk to arrive early, and stay in the spectator enclosures till the last car has gone through.
Posted by John Fife at 14:20