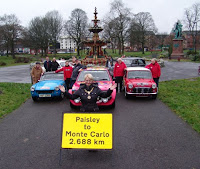 Around 80 cars are expected to gather in the shadow of Paisley Abbey tomorrow afternoon ahead of the 2017 Historic Monte Carlo Rally start which gets underway at 6pm.

Paisley is the only British start point, out of seven European cities, for the 1300-mile trip to the South of France.

The Historique class will feature cars which competed in the Monte Carlo Rallies between 1955 and 1980 while the Classique event is for older cars from 1911 to 1980. Bringing up the rear of the entry list are entries in the Monte Heritage Runs which have no intention of going anywhere near Monte Carlo, instead taking in a series of short classic routes in Scotland.

Playing a starring role in this year's event will be Paddy Hopkirk's Mini Cooper S which he drove to sixth place overall 50 years ago. Now in the hands of Coltness Car Club stalwarts, Pat Haley and Mike Hyrons, the car has been completely refurbished and rebuilt ready for a return visit to Monaco.

About the only thing Pat 'Paddy' Haley shares with the Northern Irish legend is the initials 'PH' but Pat did take part in forest stage rallies in the 1980s with his Talbot Sunbeam so he has some idea of what lies ahead. Mind you, a certain stalwart (who shall remain nameless) within Coltness CC is taking bets on how far they will get before their first major fall-out!

The trouble with Minis is that there isn't much room inside the thing to get away from each other. Such confidence, eh?

Pre-rally start festivities will get underway from 4pm with lights, music, street food and pyrotechnics before the formal and official start commences at 6pm.

So if you fancy a bit of a wallow in automotive nostalgia pop along and join the fun.
Posted by John Fife at 14:13