The good news is that today’s weather forecast is accurate. The bad news is, that it’s wetter than an otter’s pocket here in Castle Douglas. On that basis, it is to be hoped that tomorrow’s forecast is going to be just as accurate. At the moment it is wet, gey dreich, very wet, dismal, and even more wetter! It’s also grey and overcast. Get the picture?

Tomorrow’s outlook is for the rain clearing overnight leaving us with gloriously dry and typically sunny Scottish summer weather. We live in hope.

At the VIP/Test day earlier today, there were groups of drookit, bedraggled spectators and interested parties gathered under the dripping trees and they were treated to a star quality turn-out of testers including the two main protagonists, Garry Pearson and Jock Armstrong. Just making sure that everything was hunky dory before the big title fecht tomorrow. Also in attendance were their rivals intent on spoiling someone else’s party if it benefitted their own hopes and aspirations, including Mike Faulkner and John MacCrone.

No times were taken of course, this being just a mechanical shakedown ahead of this final round of the ARR Craib Scottish Rally Championship. The only certainty is that the Armstrong Galloway Hills will determine who wins the national title, but the big uncertainty is who will win the rally!

By the way, did I mention it was raining? 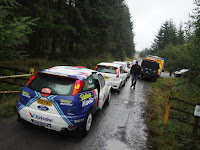 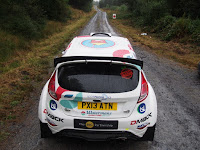