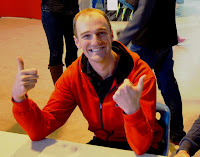 In addition to the Northern Irish, English and Irish interest on the forthcoming WRC counting Tour de Corse, there will be a little bit of tartan being flaunted, or rather, some red and gold stripes!

This will be Stuart’s first outing in the Junior WRC and his first time competing in Corsica. He is due to meet up with Mohamed for a test session in southern France the week before the rally.

“I’m really excited about the chance to co-drive Mohamed in Corsica,” said Stuart. “Everybody in the sport knows about the challenge this island provides – it’s not known as the rally of 10,000 corners for nothing!"

“Mohamed’s shown plenty of pace in what is a very competitive Junior WRC field this season. He’s clearly a talent for the future and is coming from a region where rallying’s really popular. Abu Dhabi is synonymous with success in the world championship thanks to Sheikh Khalid Al-Qassimi and, of course Kris and Paul winning in Portugal and Finland earlier this season."

“The chance to join a team of the standing and professionalism of Abu Dhabi Racing is a fantastic opportunity for me and one I intend to make the most of. I’m fortunate that one of my closest friends in the sport – Scott Martin – works for the team co-driving Craig Breen. Scott’s already given me some guidance about what to expect from Corsica."

“The event will also be my very first time competing in a DS 3 R3T, it’s always nice to get more experience of another car.”

Mohamed admitted he was looking forward to welcoming Stuart aboard the Abu Dhabi car. He added: “This is a great opportunity for me. I look forward to working with Stuart and to learn from his experience. I think we will have good chemistry on the stages in France.”

Not only 'good chemistry', but also, 'excellent snacks' methinks.
Posted by John Fife at 17:05