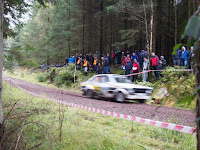 Welsh rally fans have got themselves together to mount a campaign to persuade the National Assembly for Wales to implore the Welsh Government to ensure that future cost increases for the use of forest roads for car rallying in Wales are fair and in line with costs in England and Scotland.

Natural Resources Wales wants to almost double the forestry charges for rallies using the Welsh forests, and if they get away with it, who knows what our lot in Scotland and England will make of it?

So please sign the Petition (link below) to try and help our Welsh pals and hopefully enlighten the Welsh Government that this is not just a local issue. Rallying in Wales affects us all, not least because the British WRC round uses their terrain. The country stands to lose millions of pounds if they price the rallyists out of the woods. That will have a huge impact on what is pretty much a rural part of the United Kingdom which is dependent on tourism to sustain life in the valleys and villages.

Both the Scottish and British national governments have singularly failed to implement legislation to allow Closed Public Road rallying which means that if we don’t have the forests, we won’t have multi-venue stage rallying at all.

The sport is under threat from all sorts of other interests at present, from nesting birds to ramblers, from lack of Government support to hugely increased costs and the workloads being inflicted on amateur organising teams. Not to mention a distinct lack of numbers of volunteer support at marshalling level. The clubs are doing their bit to attract new members, new volunteers and encourage new participants.

The sport needs a champion. Someone with clout who can organise a movement and present a sustained and cohesive campaign, because for sure we are not getting the support or leadership from the sport’s governing body.

Everyone has access to their local MP, MSP and Welsh Assembly members. They all have email addresses but what s needed is for everyone with the interests of the sport at heart to write to them at the same time. And then follow that up if they get no reply. To be effective, I reckon it needs everyone to do it the same week. The clubs can’t do it on their own and individuals need guidance.

Is this a job for the Associations? I’m going to raise it at next month’s Scottish Association of Car Clubs for starters.

Sign the petition, let’s see how many folk are concerned. It won’t even cost you a stamp! By all means share this post or ‘like’ it. Whatever, don’t just sit on your butts sucking your thumb. Let your fingers do the talking. Sign the petition.