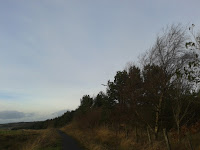 In this case, they are in Kielder Forest. A pair of goshawks to be precise. They have taken up residence in a tree close to one of the Jim Clark Reivers Rally stages. A most thoughtless and selfish act, since the organisers have now been forced to re-route. One of the local foresters spotted the birds and requested that the rally organisers seek an alternative route. Guess what? They did - and then found another pair nesting near another stage.

Organising a rally is not for the faint-hearted or those possessed of a weak resolve. More effort was expended, time spent and miles covered to redeem the situation which also required that the Safety Plan be re-written and marshalling requirements re-allocated and all the while keeping the SD (Safety Delegate) up to date!

Despite the lateness of the hour and the mountain of work which had to be torn up and re-planned it was noted by the rest of the organising team that the Clerk of the Course was not tearing his hair out in frustration. Mind you that might have had more to do with the fact that he doesn't have much anyway!

Whatever, the whole kerfuffle brought to mind that well known phrase 'Wherrza burds?' which was introduced into Scottish folklore by Jonathan Watson (Only an Excuse) in homage to the legendary Celtic and West Ham player Frank McAvennie.

Also please note the non-photo-shopped, un-retouched, genuine, action fotie of a burd in flight - now just waiting for David Attenborough to phone with a job offer. Wildlife Photographer of the year perhaps?
Posted by John Fife at 14:15