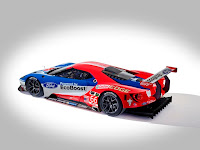 Just ahead of this weekend’s Le Mans 24Hrs, Ford Motor Company announced that it will return to the French circuit next year on the 50th anniversary of Ford’s 1-2-3 finish at the 1966 race.

Based on the all-new Ford GT supercar unveiled in January, the race car will be powered by the race proven 3.5-litre EcoBoost V6 engine as used by Chip Ganassi Racing last year and this year.

Two Ford teams will be operated by Chip Ganassi Racing with Felix Sabates (CGRFS) and they will be supported by Multimatic Motorsports, Roush Yates Engines, Castrol, Michelin, Forza Motorsport, Sparco, Brembo and CGRFS. The race car has undergone extensive design and testing within Ford and Multimatic, with CGRFS providing input into the development. Roush Yates is supporting development of the 3.5-litre EcoBoost V6.

So it looks as though there will be no ‘official’ Ford return to the World Rally Championship once the GT race teams gets their hands on the budgets!
Posted by John Fife at 17:40