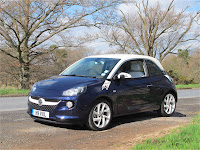 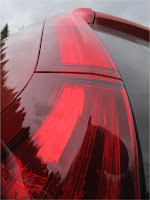 Don't know whether I've started something or not, but quite a few folk were left puzzled by last week's mystery car pics. I was going to reveal all on Sunday, but I got taigled up in something else, so here is a photo of the velocipede which I was driving last week. It is Vauxhall's new Adam, although Vauxhall claim it is not named after the company founder, Adam Opel. Both Fiat and MINI have scored quite a bit of success with their modern take on design classics, the Cinque Cento and the real Mini, but without a retro to re-model, Vauxhall have come up with their own take on the idea, much as Citroen did with the DS3. The Adam won't be to everyone's taste, but the women in the house think it looks cute. Me? I felt like I had been caught wearing a pink tutu and carpet slippers - with zips.

Apparently some of you thought last week's puzzle was too easy, so here's this week's. What did I drive to Fort Augustus and back?

The report for the Fort Augustus Gravel Sprint is now on the website: