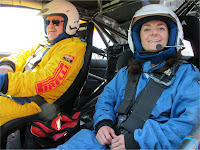 For one bride and groom, it was a matter of “Don’t Panic!” when they heard that they would have to share their wedding venue with one of the biggest sporting events in Scotland, the Jim Clark Rally.

Georgie Moor and Eddie Bell are getting married at Kelso Racecourse tomorrow Saturday the 1st of June, and it was only after they had booked the venue they found out the rally was coming to town that same weekend.

When Georgie heard she was sharing the Kelso Racecourse facility with the rally she did what any bride would do – she asked if she could have a run in a rally car, to fulfil a lifelong ambition!

On the day before her wedding she was duly zipped up into a racesuit, crash-hatted and belted into a rally car for the day of her life before the biggest day of her life.

Her reaction: “Wowww! That was fab. But I was too short to reach the normal co-driver’s footrest so I couldn’t brace myself, although I was well strapped in. But that was fab!”

Husband to be and long time rally fan Eddie Bell also got a run with rally driver Brian Kinghorn after Georgie: “I’ve watched the Jim Clark Rally for years but never been in a rally car,” said Eddie, “the g-forces under braking and during cornering are unbelievable.”
Originally from Wooler, Georgie works as a beautician in Kelso while Eddie is a gamekeeper with Lothian Estates at Jedburgh.