The Bad News and the Good News

The Grizedale Stages Rally, originally scheduled to run on 4th December and re-scheduled to run on 15th January has been cancelled. The organisers took the reluctant decision at the weekend when insufficient entries were confirmed following last month's Storm Arwen inflicted original date.

Further south, the 31st Autosport International Show, scheduled for January 13-16 2022, at Birmingham’s National Exhibition Centre, has been postponed due to Covid-19 concerns and restrictions. Alternative dates are under consideration and options for ticket holders will be communicated shortly.

Closer to home, the Scottish Association of Motor Sport Clubs is looking for a new Chairperson. Chair for the past five years, Pete Weall has resigned for personal reasons. Pete will be a hard act to follow as he was one of the more highly visible Chairpersons that the Association has ever had, popping up unexpectedly at Marshal's posts or in the co-driver's seat, and attending various events around the country promoting the SAMSC's interests, seeking and sounding out regular folks' opinions and interests. He also represented the SAMSC at MS UK council meetings and was Chair of the Motorsport UK Regional Committee. Elections will be held in March.

Similarly, the British Rally Championship is looking for a new Rally Manager. Iain 'Skunner' Campbell has been appointed FIA European Rally Championship manager takes up his new position this month. He is a former Rally GB clerk of the course and also chaired the stewards at WRC rounds. The eight round 2022 ERC series is set to get underway in Portugal in March. Whilst I'm sure we all wish him luck, I think we should all be concerned for his welfare. The only thing redder than Rudolph's nose is a Scotsman in the Mediterranean sunshine.

On  another positive note rally driver and co-driver, and some time racer, Ashleigh Morris is amongst the Formula Woman finalists. From over 800 applicants from 16 countries, the final 50 have now been selected to take place in the finals in March. The 6 winners will then be chosen to compete in the 2022 GT Cup in a McLaren! Gaun yersel Ashleigh, just make sure you "blow the bluidy doors off" the opposition!

And on a more personal note. Apparently concerns have been expressed within the confines of Castle Bunnet at the recent news which the Junior 1000 Ecosse Challenge has announced. As of this month Rhona Dickie will take on the role of Championship Co-ordinator. Rhona has been a valuable member of the team since the early days of championship and is both well known and respected within Junior rallying. 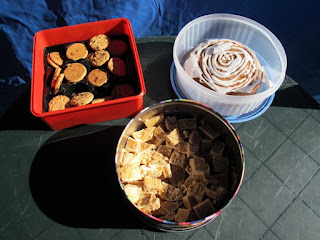 However, of more pressing concern to my big pal Jaggy is: "What about the tablet?" For those who didn't know, Rhona brings two large tins of God's nectar (home made Scottish tablet) to each round of the Junior rallying series. This life sustaining, energy boosting succulence is regarded by many as the main reason for a certain journalistic presence all too often seen within the Junior 1000 marquee under pretence of reporting on the youngster's rallying activities.

But will her new duties allow her the time to continue this tradition? Apparently, the big chap is seriously anxious about this turn of events!