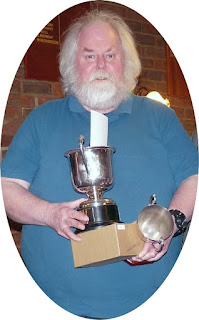 I've only just heard, but sad to report but another good man gone. Gavin Heseltine passed away last month on the 23rd December. A stalwart of North Humberside Motor Club he was better known to us up here as Allan McDowall's regular co-driver, first in the Opel Kadett, then the Escort Mk2 and back to the Kadett. Together  the pair contested over 130 rallies although Gavin's career started some 40 years ago navigating for a variety of drivers from the Snowman in the north to Somerset in the south and everywhere in between including Ulster and Wales.

In 1988, Allan McDowall entered the Border Counties in his Kadett with a TBA in the co-driver's box. He was introduced to Gavin through a mutual friend and stepped into the unknown. Allan recalls that within 4 miles the Kadett was parked up with its tail in a Kielder ditch and they both sat there thinking the very same thought: "What the heck have I let myself in for!"

It was probably the first time that Gavin had been in such a quick car and Allan was already regarded as a handy driver. He had fitted a new Astra 16v engine and 15 inch wheels for the Jim Clark Rally earlier in the year but he was running ex-Murray Grierson and Jim Carty part worn tyres. The bigger wheels were fouling the front arches so the car was a bit of handful although they did manage to get out of the ditch having dropped only a couple of minutes and went on to finish 8th, right behind the previous year's Border Counties Rally winner, one Andrew Wood Esq! 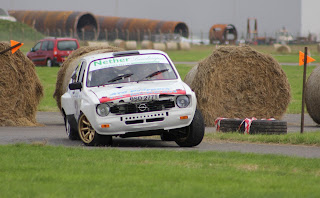 A new partnership was born. They enjoyed much success culminating in winning the 2006 ANCR Clubmans title and 2011 BTRDA Silver Star Championship. Their final outing was last November's MAM Malton Forest Rally where driveshaft failure denied them a finish.

Perhaps the most odd thing about Gavin's competition career is that he did not have a driving licence. He travelled the length and breadth of the country by train or blagging lifts from other competitors and according to Allan, "he was never late - although the same couldn't be said for me!"

However he did hold a Provisional licence at one time and had taken a few lessons but had never taken the process any further, although passing his test and buying a car was on his 'bucket list' for when he retired from work.

The lack of driving licence didn't hold him back. He was part of a hard working team within NHMC taking an active role in the planning and organisation of the club's three single venue rallies and acted invariably as Secretary of the Meeting or Entries Secretary. He was also heavily involved in the running of the North Humberside Forest Rally. He also undertook much of the club's paperwork including editing the club magazine.

Outwardly a quiet thoughtful man, he had a number of nicknames which indicated a wilder streak. He was sometimes referred to as 'the Viking Warrior' or 'Hagar the Horrible' but had a rather less well known nickname 'the Gazelle'. It is alleged that in the dim and distant past on a snowy event in Yorkshire the car he was in eventually got stuck having been off some 3 or 4 times already. Gavin decided to walk out of the stage looking for help but couldn't walk in the road because of oncoming cars and was trudging through the deep snow at the sides. At one point he feared for his life when an out of control car appeared to be coming straight for him at which point he recalled himself that "I leapt like a gazelle across the ditch and into the trees". A remarkable feat given his physical girth, and a tale which he oft-repeated against himself, with each re-telling of the story becoming more outrageous. In moments of stress Allan would often turn to Gavin and ask,"what do we do now Gazelle?"

Gavin became ill in mid December and passed away peacefully at home. He was only 65. He'll be a sad loss to his family, his many friends, and particularly to Allan, North Humberside MC and to the wider sport of rallying.