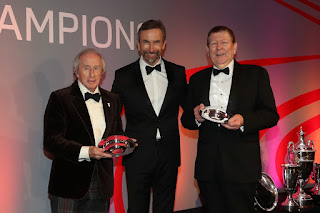 There were a few marauders from the far north in London (near France) a few days back at Motorsport UK’s annual Night of Champions held at the Royal Automobile Club.

Presented by Steve Rider and Hannah White at the invitation of David Richards CBE, Chair of Motorsport UK, the star-studded guest list included Sir Jackie Stewart and newly appointed FIA Vice-President for Sport, Robert Reid, amongst many others.

Motorsport UK awarded Sir Jackie its Lifetime Achievement Award to acknowledge the enormous contribution, the three-time Formula One World Champion has made to track and competitor safety since the 1960s. Involved in a serious accident at Spa-Francorchamps in 1966, Sir Jackie became an advocate for motor racing safety, which included pressing for mandatory safety barriers at circuits, seat belts for all competitors and full-face helmets.

Never one to miss a free meal and some booze, the RSAC's Jonathan Lord also attended this glittering event. He received the second tier of the governing body’s Lifetime Achievement Award in 2021 in recognition of more than 40 years’ volunteering service to the sport. A Motorsport UK Steward since 1978, he has represented Scotland for many years at Motorsport UK on Rallies Committee and the Motor Sports Council. The Scot has been an International Clerk of the Course since 1982 and still actively attends events in many roles.

There was however one other rather important guest missing, one James S McRae Esq. Whilst we were all shovelling snow or cutting up fallen trees in storm struck Scotland, he was sunning himself in Spain and having to endure temperatures of 19 degrees. I almost felt sorry for him!

In all fairness, he did phone his son Stewart back home in Scotland and asked if he should come back for 'the do' but Stewart telt him: "Stay where ye are, it's freezin' here!"

Also in the photo is Hugh Chambers CEO, MS UK - he's the one in the middle!