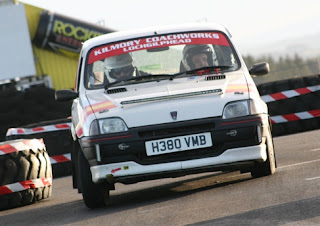 Gaun yersels ladies ... Without wishing to be politically incorrect, or even sexist, it's well worth noting that there were two young ladies in the top three positions overall at the end of last year's Marshall Construction  Scottish Tarmack Championship. 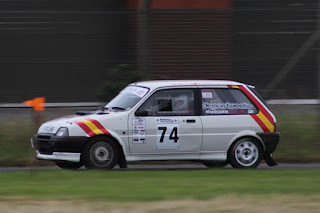 The final results were confirmed recently, as the method of scoring points is way beyond the likes of me on this class based championship, so had to wait for official confirmation that  Kirsty had done it - an achievement that World Champion Robert missed out on by the way.

So as far as achievements are concerned, some would have it that Kirsty's success far exceeds Reid's. All he had to do was keep Richard Burns on track, Kirsty had to cope with her auld git faither and the self-built and maintained 1 litre Metro. Keeping him shiny side up in that wee buzz bomb must have taken some doing - or an awfy big stick!

Looking ahead, the Scottish stage rallying season fires up next month but if entries for the Riponian & East Riding Stages in  North Yorkshire are any indication then things look a wee bit more hopeful for up here. Ripon Motor Sport Club have 132 entries and 15 reserves (so far) for their event on Sunday 6th February.

The 44 mile, 6 stage event also includes a couple of miles of tarmac but the main reason for that is that they link up some smaller forests and cut down on public road use.

The event also counts towards the MS UK British Historic Rally series plus some other regional championships like the ANCC, ANWCC and S G Petch stage championships so there's a lot to go for.

Closer to home, the Kinloss Stages at Kinloss Army Barracks close by the Moray Firth on Saturday 12th February will officially get the 2022 Scottish season underway. This is a brand new venue for the sport and the Condor Motorsports Club reckon the tarmac surface is better than many of the public roads in the area! The organisers are planning a 6 stage / 52 mile format with NO splits! That means each stage will be around 9/10 miles long.

Anyway, a week later the new-look Burnside Piling Contractors Scottish Tarmack Championship takes to the stage on Sunday 20th February at Knockhill. This will be the first round of this year's 11 round championship series. More info shortly.