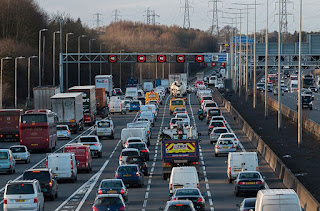 Driving through Glasgow this morning, I came across a car parked up against the armco just beyond the M77 interchange on the approach to the Kingston Bridge. There was no 'safety' lane there and although the hazards were flashing it looked an awfy worrying place to get stuck with traffic whizzing past and lane-changing.

At a time when politicians, government departments and civil servants are coming in for  a hard time, and rightly so in many instances, it's good to see one department responding to public disquiet, albeit rather later than some folk wanted and have been campaigning for.

The Department for Transport has announced that it will halt the rollout of new, all-lane running smart motorway schemes until they have amassed five years of relevant safety data. On that basis, the Government’s decision in March 2020 that all new smart motorways will be all-lane running motorways was premature. Hopefully their experts and statisticians will also look at the issues of 'Dynamic hard shoulder' and 'Controlled motorway' schemes.

Although not a problem in Scotland (yet!) many of us have experienced these so-called 'smart motorway' sections down south, especially around the NECC at Birmingham at exhibition times. From a personal point of view, they give me the heebie jeebies, especially when an eighteen wheeler with foreign plates thunders past!

Current figures suggest that these roads are safer, but without full statistics, there must be some uncertainty. For sure casualty rates have dropped since their introduction, but fatal and serious injuries have increased.

So how long will this new review take to amass five years worth of data and report its findings?  Depends on when they start!

Past experience suggests that some of these folk are not the best timekeepers in the world. Meanwhile I'll just have to put up with the heebie jeebies!