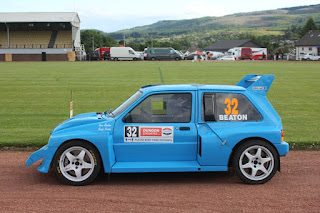 The report on the Dunoon Presents Argyll Stages has now been submitted to 'Motorsport News' and should appear in all its glory next Wednesday along with some of Eddie Kelly's pics. There's also a wee story about the background to the rally and the heroic efforts of Mull Car Club and friends to put the show on the road - a brand new event, closed roads and a stage through the centre of Dunoon, and all done under the shadow and constrictions of Covid. Amazing.

And what a rally it was. 'Motorsport News' allows 1200 words for a full rally report, but think on it, 120 cars and crews, 13 stages and two days - it's more a question of what to leave out than put in the report. On top of all that there was drama and excitement galore. It's amazing what a year and half off does to adrenalin pumps, eh?

No doubt the brickbats will come thick and fast after publication, but that's par for the course. However, any real personal insults will be handed over to my big pal Jaggy, so beware a chap on the door in dead of night. 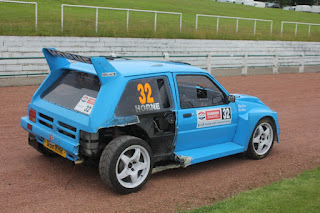 Anyway it gives me a chance to get the more comprehensive report finished for publication in 'jaggybunnet.co.uk' later in the week.

As for the 'before and after' pics, we saw Andy Horne's latest creation out on the road for the first time. A 3 litre V6 engined Metro 6R4, but he didn't finish. Not because there was anything wrong with the car but when he punctured a rear tyre it kind of damaged the rear quarter a wee bitty. The Scroots then refused to allow him to re-start the rally without a mudguard over the exposed wheel and a new rear light cluster. Spoilsports, but that's only right, we are all god-fearing, fair minded, law abiding citizens are we not?