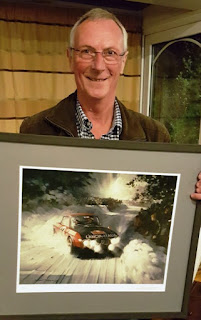 Motor sport needs 'doers' every bit as much as it needs participants. Those behind the scenes, often faceless figures, that we all seem to take for granted - until something needs sorted or goes wrong.

It is notable that at the conclusion of most motor sports events there has been created a formal Protest procedure for aggrieved competitors to follow should they feel the need, but no such formalised process for expressing one's thanks to the organisers for providing the day's competition exists. Usually they all just pack up and go home.

The sport also needs those men and women of vision who can guide, shape and plan for the future and who can spot troublesome issues approaching over the horizon and then head it off at the pass.

Mike Gascoigne was one of those visionaries and 'doers'. A highly respected Edinburgh solicitor whose off-duty passion was motor sport, in all its forms. He passed away on Friday and the sport will be the poorer for his loss.

Mike was Chairman of the Royal Scottish Automobile Club from 1998 to 2000 and he was still Chairman of RSAC Motorsport when he died. In later years he served as a Director on the RSAC and as Chair of the Scottish Rally organising committee.

In fact he was one of the founding members way back in 1972 when he, David Swinton and Peter Francis first came up with the idea of a club purely for motor sport volunteers. A database of members was created and they were all advised of upcoming events through the club's newsletter, 'Marshal's Post', a vital service in the days before the Internet.

The idea for the club arose from attendance at a Training Day at Silverstone in 1970 organised by the British Racing & Sports Car Club. That sparked a desire to create a more 'professional' approach to the volunteer support back home in Scotland

The Scottish Motorsports Marshals Club was founded in 1973 and officially established as a limited company in 1976 to "to inform, to encourage and to improve" and led to a much more 'professional' approach to on-event safety and Marshal training.

Mike served SMMC as Director, Treasurer and Secretary, and latterly Honorary President, throughout the club's development from instigation to current times.

He was also part of the team which organised the first ever SMMC motorsports marshals training day at Croft Circuit in 1979. That day will be forever seared on the memories of those who were there, especially those who returned home with singed fringes and smouldering clothing from the fire rescue demonstration. It provided a salutary lesson to all that motor sport was indeed dangerous and although the activities provided a 'fun day out' there was a serious purpose behind it, and that continues to this day - and with Mike's foresight, beyond.

Mike's legal mind and expertise has been a great help throughout his involvement with Scottish motor sport which now stands in better stead because of it. He was educated at Fettes College In Edinburgh before entering university and onwards to pursue a highly successful legal career.

And although we have much to thank Mike for there is one dubious mark on his CV.  As a Prefect at Fettes College in Edinburgh, Mike had a 'fag'. No, not a Scottish cigarette, but an English derived term for a schoolboy servant, a more junior schoolboy who would run errands and carry out other duties as required by the more senior 'boys'. Mike's fag was one Tony Blair Esq, former MP and PM, and we all know how that turned out!

Mike started to take more of a back seat over recent years standing down from his various Directorships and succumbed latterly to cancer.

We all owe a great debt to Mike and offer condolences to his family, friends and colleagues who will miss the erudite arguments, meticulous mind, dry wit and endless enthusiasm.

Photo: When Mike stood down as Secretary in 2019 the SMMC Board presented him with a print of a Lancia – his favourite manufacturer.

A full version of the Tribute is here: