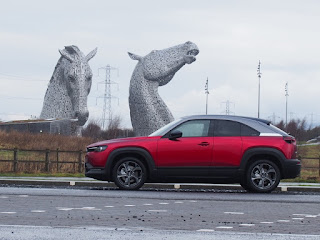 There are some more worrying signs within the Bunnet household. Concern is being expressed about the wellbeing of my big pal Jaggy. With more manufacturers building more electric cars, it would appear that he is succumbing to their charms.

It has been alleged that he has been seen driving around in such demonic devices and actually smiling while doing so. Observers seem pretty sure that these were indeed 'smiles' as opposed to 'grimaces'. And this despite the lack of gearboxes, clutches and aural accompaniment.

It's this latter attribute which generates continuing doubt. Raised on the sound of flat head V8s, straight sixes, Twin Cams and BDAs, this apparent liking for an automobile which is virtually silent is therefore awfy suspicious.

Another very suspicious and extremely worrying omen has been the appearance of two new posters on the wall of his garage. Alongside the BMC rosettes, Michelin men, Rothmans posters and others advertising 'Castrol R' and 'Esso Puts a Tiger in Your Tank' is one of Greta Thunberg.

Even more troubling, there is a more recent and darkly foreboding addition to this display. It portrays Patrick Harvie in full rumpled Harris Tweed electioneering pose, glaring and pointing accusingly, and ordering us all to go green. This surely a much more worrying sign than Jaggy eating all of his vegetarian haggis with kale and pak choi salad.

Which prompts the questions, is it medical or psychological? Alcohol related - or lack of alcohol? Advancing years or lockdown leeriness? Or is it simply an acceptance of the inevitable?

That too is hard to bear. Simple acceptance is not a trait for which he is renowned. This fearless forestry fighter for justice, friend of the underdog and bitter enemy of authority has long been a pain in the backside of those who wear blazers instead of anoraks and shod with shiny shoes instead of wellies.

He was most recently spotted at the launch of the all-new Mazda MX-30 electrically powered automobile. Although this event was attended by other motoring journalists, no-one admitted seeing him. Apparently, he had been, driven and gone by the time I got there, so neither can I be sure it was him. Apparition, ghost or a figment of the imagination. Who knows?