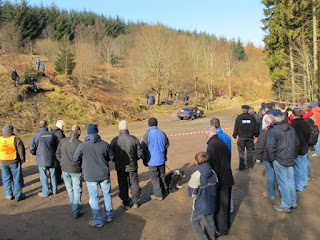 Before we all get carried away by the news that MS UK has given the Trackrod Rally in Yorkshire on 24/25 September the thumbs up for forest stage rallying to resume, there are a significant number of hurdles yet to overcome. Principal amongst those are the number of people allowed inside each competing car and the management of spectators.

Perhaps the most difficult of these two is the latter. Unlike single venue events where public access can be managed, forest stages and closed public roads will provide a far bigger challenge. At last weekend's Grand National at Aintree crowd numbers were limited and small white circles were spaced out two metres apart on the grass in the public enclosures where people and their bubbles were permitted to stand and watch. I don't see that being a practical solution in the forests or wide open countryside. And no amount of telling will stop the die-hards from venturing into easily accessible and more remote locations.

Then of course there are other restrictions to consider. Not just the two people per competition car but what about Ambulance, Paramedic and Breakdown/Recovery crews. Not to mention Service Crews. If three people are allowed to work on each car, how do they travel from Start to Service to Finish? That maybe manageable for the single-car private teams but we are seeing more and more bigger units, even at national one day events, where three or four cars are being run by one large entourage.

And suppose members of the family want to accompany drivers and co-drivers? And I haven't even mentioned Marshals yet. It's all very well having remote signing on, scrutineering and stage timing but there will always be a  need for hands-on Marshalling along the route and in stages, even if only for safety purposes.

What hasn't been mentioned so far is politics. The four home nations have all taken a slightly different approach to Covid19 management and that could also affect competitors and officials from different areas travelling to and from events.

Nope, a 'return to normal' is not going to be easy and before we get too carried away, some of the 'experts' are concerned about another spike in infections which may or may not require more restrictions being imposed. If the NHS comes under pressure, that will have another impact on amateur sport too.

In the meantime, clubs and organising teams across the country are still planning events dated for June and July with little in the way of assurance, let alone guarantee, that the plug won't be pulled at the last minute. That too may well be affected by the vaccination programme which is targeted to have all adults double jabbed by the end of July.

There is yet another factor to consider. The Trackrod is being seen as a 'trial' event, just as last year's 'M-Sport Return to Rally' event tested out new management and remote timing systems. Much was learned at the Cumbrian single venue forest rally particularly with regard to Stage and overall Event Timing, but what was also noticeable was the number of spectators who had gathered in the undergrowth in a private forest. The persistent rain had done little to dampen fans' enthusiasm for the chance to see, hear and smell rally cars in the woods.

So far there is no word from on high with regard to official permission being granted to allow stage events to be run north of the border and the fear here is that motor rallying won't be at the top of the list. Especially with the Scottish Parliament being 'closed' at present for the forthcoming general election. So it's OK to shut down government during a pandemic and organise a mass public event like a general election? Nuts! It could have been delayed by a few months till everything else is 'safe' to open and everyone has been double jabbed.

So what's the answer? Unfortunately there isn't one, but if everyone sticks to the current guidelines and gets their jabs then positive progress can be made.  Rallying needs to show its responsible face and adhere to the pandemic guidelines and restrictions. As the shepherd dipping his sheep said when he saw one jump right over the dip: "One missed sheep and we'll all be flocked".