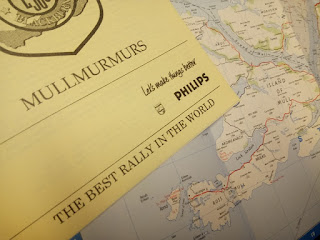 With the sale of the weekly 'Motorsport News' to Kelsey Media, press coverage of the 2020 rally season is all set for a bit of a shakeup.

As far as Scottish stage rallying is concerned there is still only one presence which offers comprehensive reporting coverage. That's all set to kick off again this week ahead of the Knockhill Stages and the Snowman Rally, so if you want to know what happened last year and find out what's going on this year, drop in and have a look on a regular basis at as well as here on the Blog:
www.jaggybunnet.co.uk
https://www.facebook.com/JohnFife.Motoring

For coverage of British rallying there are a number of print options. The big change at 'Motorsport News' is that David Evans has left the paper to become the Rallies Editor for the USA based Dirtfish organisation. David will be a hard act to follow at the weekly although the appointment of Colin Clark as MN's Rallies Editor does sound promising.

The monthly 'Pacenotes Magazine' is continuing its UK wide expansion covering all of Irish and British rallying with a huge range reports, features and interviews. Similarly, 'UK Rally Scene' magazine is doing a grand job for the British club crews.

But the biggest changes concern World Rally coverage. Better known for its American rally school activities, Dirtfish is also getting in on the WRC reporting scene with new appointee David Evans presenting in-depth coverage from each of the world series rounds - and well worth a listen and a look:
https://drive.dirtfish.com/rally-media/

For instance, as part of his pre-Swedish rally coverage David Evans posted an interview with one George Black Esq., M-Sport's tyre wizard. Former co-driver and Sprint Tyres technician, George knows more about tyres than Bibendum, that tubby, tyre shaped French character who bounces around the service parks.
The interview is here:
https://youtu.be/WG2tQUF6Qgg

With all this in mind, I reckon there is no need for the John Fife Blog and Facebook Sunday night/Monday morning roundup after each WRC counter. Last year with the help of the teams I published short reports on the British interest in the series, but that's not really needed any more, is it?

Sadly, there are no front running, headline grabbing Scottish competitors any more. Them were't days, eh?
Posted by John Fife at 23:07