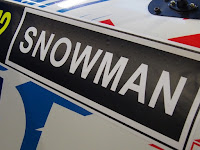 To-morrow’s six forest stages on the Arnold Clark Snowman Rally are virtually snow-free although there is a good stretch of ice over the Ben Wyvis 4th test. Will it polish or will it break up? Well have to wait and see. But with showers predicted overnight who knows what tomorrow will bring?


Although the sun shone all day in the Inverness area the minute it dipped below the horizon the temperatures plunged. So how cold did it get? Put it this way, it must have been too cold for polar bears because none were spotted raiding the bins behind McDonalds.


Even so, it would be a brave or foolish pundit who would try and predict the winner tomorrow even if the stages don’t cut up and remain firm and fast all day for all runners.


If that’s the case then Mike Faulkner and Bruce McCombie in their Mitsubishis will be in with a shout. The Lancers may not be quite as nimble as the R5s but they are faster. And with no Garry Pearson that puts Donnie MacDonald in the frame but he’ll have to keep an eye on Mark McCulloch.


Mark almost had a deal in place to run a Mitsubishi Mirage R5 but it didn’t happen and so at the last minute a deal was done to run a Dom Buckley Fiesta R5. Not having managed to get anything like a wee test, Mark’s only experience of the car was a 2 mile run along the road this evening to Scrutineering!


There will be some Subaru heavy metal around as well. Quintin Milne has an S11 and Fred Milne has a 12b but Q is suffering from a bout of that most debilitating of all illnesses, man-flu. He was last seen seeking compassion and a cuddle from one B Watson  Esq, aka, the Sheriff. Bad move.


Shaun Sinclair was a late entry but at a test earlier today the boys had to take the gearbox out to change a sensor because “the front end wasn’t talking to the back end!” And you won’t find that fault in a Prodrive or a Haynes Manual.


As ever, for a stage by stage account of progress tomorrow, check out the Results on Brian Thomson’s ‘FlyingFinish.co.uk’ webpage and I’ll keep my ear to the ground for scuttlebutt and tall tales.
Posted by John Fife at 21:16