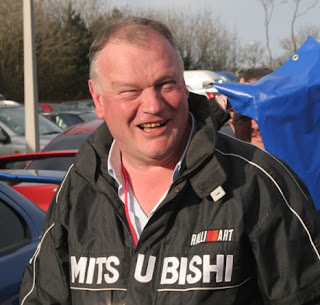 Robert Alexander Shepherd. Many of you will know the name and more of you will recognise the face, even though the majority of Scottish rally fans won't know what he did, but Scottish rallying lost a true friend and sporting ambassador on Sunday. Bob Shepherd, the founder and Dealer Principal of Station Garage at Torphins and Aberdeen, the main Mitsubishi dealer in the North East, passed away all too suddenly and unexpectedly at the weekend. He was only 61.


He was a big man with a big heart. When he got excited he could talk faster than a turbocharged exhaust on the over-run and that excitement was infectious whether watching rally cars or rugby players. Over the years he has 'helped out' both the Speyside Stages and Granite City/Grampian Stages Rallies with the loan of vehicles and equipment while 'helping out' many drivers from the McRaes and Robbie Head to local drivers such as the McCombies and John Wink and many, many others. In fact, he would help out just about anyone with a Mitsubishi, and even some who didn't!


Bob didn't use the term 'sponsorship', he preferred the phrase 'helping out' and that's just what he did. No big fanfares or grand gestures, just a nod and a wink. He even got embarrassed when you tried to thank him.


One of his proudest possessions was a 2001 Ford Focus World Rally Car last driven by Colin McRae. He didn't drive it himself, he just wanted to have it. A true rallyholic.


He actually sponsored the Granite City Rally in 2008/9/10/11 and when he opened his new showroom on the north west corner of the city he hosted a Roadshow. That was a grand night. He invited customers and rally fans for an evening's fun and entertainment with top rally stars and a certain MC who was imported from Lanarkshire for the occasion.


Afterwards, Bob invited his guests back to a local hotel for a lock-in. But one thing stands out, Bob made sure his guests were fed and 'watered' first before he himself relaxed, indulged and enjoyed the company. I remember how that evening  started but I don't recall how, or when, it finished.


That generosity and kindness extended to rallies and test days where his motorhome acted as a magnet for waifs and strays in anoraks. One thing was certain, there would invariably be a big pot of stovies bubbling away on the gas ring when Bob was about. He actually mixed and brewed the local delicacy himself and dished out portions that would test the pulling power of an L200. Thus fortified a Marshal, Official or even humble Press reporter could withstand the rigours of a north east winter.


His other great passion was rugby, and at least it's some little comfort to know that he was actually there last Saturday.


His family and friends will miss the staccato commentary, the laughter and the kindness, and he will be a very sad loss to the rest of Scottish rallying too.
Posted by John Fife at 09:46