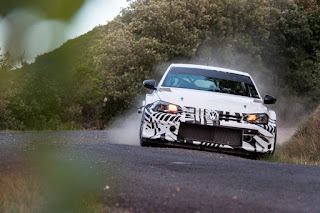 The new Volkswagen Polo GTI R5 has successfully completed its first test in Fontjoncouse, France. Over 3 days, Volkswagen test driver Dieter Depping and Swedish WRC2 champion Pontus Tidemand tested the new 270-hp rally car on the same roads where the first tests were carried out on the Polo WRC way back in 2011.

Dieter Depping was also at the wheel of the test car back then: “It is a special feeling to be back here, where the Polo embarked on its first rally adventure roughly six years ago,” he said, “It is now about achieving the best possible set-up for the new Polo GTI R5. This first test was primarily about getting a lot of kilometres under our belt, in order to give the engineers as much data as possible. I can tell you one thing now: The R5 Polo is also very good, very quick and precise. I immediately felt right at home!”

On the first day, the car was driven on a 3.85-kilometre asphalt route with the following two days spent on gravel surfaces.

Volkswagen is expanding its customer racing programme with the new Polo GTI R5, and will be offering the new rally car to professional teams and drivers eligible to compete in national and global championships, as well as the WRC2 category of the FIA World Rally Championship (WRC), from the second half of 2018.
Posted by John Fife at 11:00