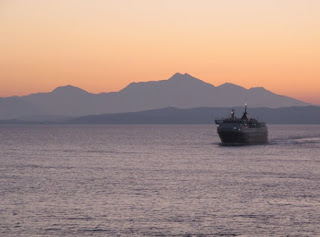 The weekend's Pokerstars Rally results make interesting reading, not just because of who did what and who didn't, but because there were a number of familiar names in unfamiliar territory. Quite a few of our lot had made the trip off-shore as well as quite a few recognisable 'furrin' names. Recognisable because we usually see them on another island, further to north, and slightly closer to Trumpland, but not this year.

There was one drawback to the Manx event, lack of info. Manx Radio did a marvellous job but there was a distinct lack of an on-event reporting service where progress was monitored, lack of progress reported and failure highlighted. Maybe MullMurmurs should relocate - just to keep its hand in of course.

Mull's loss was Man's gain. Trouble is, those who travelled liked it. There is no alternative on the 'mainland' these days. Pokerstars offered 17 stages totalling 90 miles in their two day format compared to Mull's 18 stages and 150 miles of tests over two nights and an afternoon.

Mind you, the IoM event offers a longer boat ride, 3 and a half hours from Heysham to Douglas, compared to half an hour from Oban to the sainted isle, so you don't need to rush CalMac's culinary desirable, 'dish of the day' - pie, beans, chips and mug of tea.

Pokerstars had attracted 87 entries, of which more than a dozen would probably have fulfilled their desire for tarmac last month on another island in another country.

Anyway, young Arron Newby won the Manx event, but it was an awfy close run thing between him and Paul MacKinnon. 6 seconds separated the duo at the start of the second day, before Paul punctured a tyre in the first stage and then lost the power steering later  losing a further minute and had to settle for second place overall. Alan Kirkaldy scored an exceptional result with 6th place overall and second 2WD runner behind third placed Michael Dunlop. Also in the top ten were Jonathan Mounsey and 4th placed 2WD runner Calum Duffy.

Just outside the top ten was Ross Marshall who finished 12th, while James Campbell was 46th. Ian Chadwick was a remarkable 14th overall in the wee Skoda Fabia R2, but there were quite a few more familiar names in the entry list who didn't quite make it, including James MacGillivray in the Subaru, Ross Hunter in the Peugeot, the MINIs of Daniel Harper and John Cressey, Nigel Worswick, Matt Tarbutt and Mark Constantine.

There is however a glimmer of hope, albeit a faint hope. It would appear that the Sheriff presiding over the recent FAI is due to publish his Determination later this month and not as feared next month or even January. Depending on its contents and recommendations, the Scottish Government may choose to rubber-stamp his findings - or not. In which case we'll be subjected to the prolonged deliberations of political interests, and yet another postponement of the big event.