Coming to a van near you - electricity. And sooner than you think. Many companies have been tinkering with electric delivery vans for a while now, but it's not something new. The very first motor vehicles were electric and I recall once seeing Jim Clark drive an electric milk float in a race for electric floats at Ingliston way back when the Edinburgh circuit was Scotland's only race track.

Fast forward 50 years and Ford has revealed plans for a Transit Hybrid, and this is just the start. Ford was ahead of the game when they produced a fully electric Transit Connect way back in 2011, but this followed on from similar attempts by Renault and Peugeot to 'switch-on' the UK and Iveco had a small fleet of working electric minibuses. It didn't happen. The public wasn't ready, and neither were the politicians.

It's all change now though, eh? We are being told by our elected representatives to banish diesel, forego petrol, turn off the gas, ignore hydrogen and go electric. They have decided that wind power is the way forward. Perhaps they're right, but there is as yet an untapped source going abegging. If the politicos were to follow their own advice they'd install a few wind turbines above the Houses of Parliament and the Scottish Parliament concrete jumble at the foot of the Royal Mile to take advantage of all the hot air being expended on matters of state and which is going to waste in the skies above those very roofs. 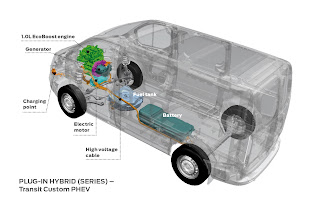 I digress. Ford has hybridised the country's most popular van. The Transit Custom PHEV has a range of up to 31 miles on battery power and uses the 1 litre EcoBoost petrol engine as a range extender. The wee engine will charge the on-board batteries when longer trips are required. It's not intended to provide a nation-wide solution but vehicles like these will be ideal for city centres and urban sprawls, not so much for cross-country deliveries. And there's another problem - towing.


At the present time Hybrids represent the most logical answer to the problem of fossil fuelled motor engines. Hybrids offer an acceptable and logical first step towards the wholesale change desired by those who govern and issue their proclamations
Posted by John Fife at 17:00