Rally Meekexico ... If any event could have been judged to justify the phrase 'the luck of the Irish' then it was Kris Meeke and Paul Nagle's victory on Guanajuato Rally Mexico.

A fourth career win was tantalisingly close when Kris approached the final stage with a near-40sec lead over Sébastien Ogier, but just 750 metres from the end of the four-day event, a mistake plunged his Citroën C3 through a hedge and into a spectator car park.

A disoriented Meeke drove around parked vehicles urgently searching for a way back onto the road. He eventually spied a hole in the hedge, regained the track and limped to the finish with a puncture and fan safety tape trailing from his car.

“I’m a lucky boy. That’s certainly one way to finish a rally and I didn’t need that. I think I might end up telling this story hundreds of times," said Kris, "I'm annoyed with myself for making that mistake. The car went wide after a big compression and we were very lucky. I quickly looked to get back on the road because I knew we could still win. That's the main thing: we showed the potential of the Citroën C3 WRC in securing the car's first win. I'm proud and delighted for the entire team, this result is for them."

The clocks showed the Northern Irishman had won by 13.8sec, ending a miserable start to the season for Meeke and his Citroën team. It was their first success of the year and Meeke leaped to sixth in the FIA World Rally Championship points.

Meeke’s error left Ogier regretting a time-consuming spin yesterday in his Ford Fiesta, but second for the Frenchman enabled him to leapfrog Jari-Matti Latvala to lead the championship by eight points.

Third for Thierry Neuville, a further 45.9sec behind, was a relief for the Belgian after crashing out of the lead in the opening two rounds of the season in Monte-Carlo and Sweden. He also gained maximum bonus points after winning the final Power Stage in a Hyundai i20.

Ott Tänak maintained his consistent start to the campaign with fourth in another Fiesta, more than a minute clear of a frustrated Hayden Paddon. The Kiwi suffered several technical problems but this was still his best result of the season.

Toyota Gazoo team-mates Latvala and Juho Hänninen finished sixth and seventh. An overheating engine and brake problems on his Yaris slowed Latvala, while his Finnish team-mate suffered sickness throughout the event.

Elfyn Evans finished 9th overall but things stared badly for him. The engine in his Fiesta failed unexpectedly just after the Shakedown and since the Rally was officially 'underway' at this point the team was handed a 5 minute penalty. That left Elfyn and Daniel Barritt playing catch-up from the start.

Despite starting the rally in last position and having to contend with the worst of the road cleaning through the longest day of competition, the Brits climbed safely into the top-ten.
Elfyn said: “It’s been a tricky weekend with the penalty and then having to run first on the road, but overall I think we can be pretty happy with the weekend. This was our first time on gravel with these new cars and we’ve completed all of the mileage with good speed and three stage victories. It could have been a lot worse for sure and we’ve collected a lot of good knowledge which bodes well for the next gravel outing in Argentina.”

The championship returns to Europe for round four next month. The Mediterranean island of Corsica hosts the Che Guevara Energy Drink Tour de Corse on 6 - 9 April. 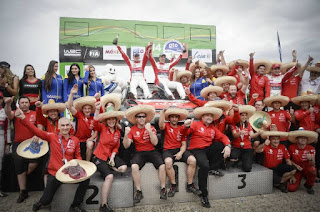 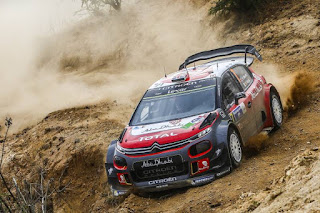