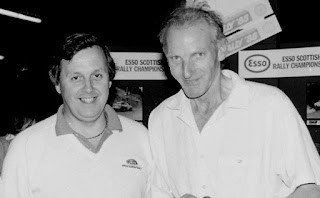 I'm sure we all wish top co-driver, rally organiser and Marshal, Roger Anderson a speedy recovery as he is now lying in regal repose between the sheets in Newton Stewart Hospital (DG8 6LZ) following an operation to a poisoned foot, and his other foot was pretty sore too.

Having been taken in and operated on in February, he missed out on attending the monthly Machars Car Club committee meeting. A small omission you might think. Not so for Roger. He has been on the Committee for 57 years and secretary for 56 of them - and last month was the first committee meeting he had ever missed. What a record, eh?

Naturally, since the operation was over, Roger was anticipating a return to secretarial duty this month but the Hospital staff were having none of it. Now, as we know, NHS staff are a grand bunch and rely mostly on liberal doses of care and kindness for their patients.

However, it has been known that certain 'inmates' can cause trouble whereupon the staff may well resort to other methods. Not necessarily 'threats' in the strictest sense of the word you understand, but Roger was 'persuaded' out of such intentions. In fact, it may well have been mistakenly inferred that he might 'succumb to other injuries' should he attempt an escape.

However, there was no need. Machars Car Club  held their March committee meeting in the Day Room at Newtown Stewart Hospital last week. Nice one you lot.

And you know what? The first item on the Agenda was the Secretary's absence from the previous meeting. Aye, there's rubbing it in, and there's cruelty. You decide.
Posted by John Fife at 15:37