Rally - Getting it wrong 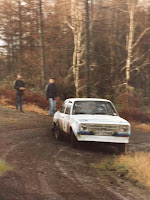 The other day, a certain Mark Grierson (son of Murray 'Mad Murr' Grierson) posted a pic on his Facebook page. The picture showed his Dad competing on the 1985 Galloway Hills Rally in an ex Vatanen Escort. It was further asserted that a certain J. Bunnet Esq was co-driving for Mad Murr!

This is not as far fetched as it sounds. Mr Bunnet was indeed an accomplished navigator and co-driver in those days. He was also qualified to undertake such competitive duties as he had a valid Competition Licence issued by the sport's governing body, the RAC Motor Sports Association.

In those days the Competition Licence was a simple printed card affair to which the licensee had to affix a passport sized photograph of "the licence holder" in the top right hand corner.

Our Mr Bunnet duly complied with this instruction and affixed a photograph of himself, and despite the fact that he is easily identifiable by the bunnet and the pipe, there was some consternation expressed when this licence was presented at pre-rally Signing-On.

Apparently the senior rally organisers were fair flummoxed, so they called over the RAC MSA Steward, one Bill Troughear Esq, who was asked to provide his considered judgement on the legality of this document.

Thankfully, this vastly experienced and fair minded individual, (who just happened to be a pipe smoker himself, although that of course had no bearing on his decision!) recognised the individual from the photograph and in consideration of the governing body's express instructions, professed that this was indeed a legal document and that Jaggy could take his rightful place alongside Murr for the rally.

It has to be said that a few minutes later, Mr Bunnet was observed to have been taken aside by this senior official, who was attempting to explain with some difficulty (he was trying to stifle his laughter) that what the RAC MSA meant by a "photograph of the licence holder" was a facial view of said person, and not a back view.

Naturally our very contrite hero expressed his horror at this quite innocent and understandable error and promised to have it rectified by the time of his next event.

In fact the whole of British motor sport owes a huge debt of gratitude to Mr J Bunnet for pointing out and highlighting this unfortunate loophole in motor sports competition licence identification and which ultimately led to the introduction of photo-card licences.

Oh, and by the way, more Stewards with the tolerance and good humour of the late Bill Troughear would be such an encouragement and asset to our sport!!
Posted by John Fife at 14:23